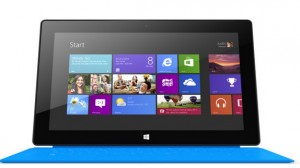 School’s out, and that means it’s the perfect time to start thinking about back to school sales, especially if you’re budgeting for a school district.

According to a report by Mary Jo Foley over at ZDNet, the Surface RT, Microsoft’s lower-end ARM-based tablet, will be heavily discounted for K12 schools, as well as colleges and universities. This comes on top of the 10 thousand Surface RTs that Microsoft will be giving to teachers that attend the International Society for Technology in Education later this month.

The Surface RT will be priced at $200, 300 dollars cheaper than its retail price, and half the price of a 16GB iPad 2. A Surface RT and touch keyboard bundle will cost educators $250. It usually retails at $600. It’s worth noting that these discounts are only available to educational institutions, and not individual users.

While Microsoft hasn’t released sales numbers for either of its surface models, analysts project that the Surface RT is a fairly weak seller. With the iPad doing very well in the education market, it’s possible that Microsoft sees these discounts as a way to win some market share back from Apple.

Microsoft has pulled the information that Foley included in her report. We’ve reached out to Microsoft for comment, and will update this post when we hear back.

Update: When asked for comment about the accuracy of Foley’s report, a Microsoft spokesperson wrote in an email: “Yes, it’s true. It’s important Microsoft does its part to help get devices into the hands of educators that help prepare today’s students with skills modern businesses demand.”

Previously on GeekWire: Crowdfund your next PC? Microsoft touts new Chip In program to woo students