As a student in this day and age, a computer is almost a necessity when heading off to college, right after twin extra-long sheets and a shower caddy. But earning enough to purchase a laptop can be a tall order.

While the process can be uncomfortable, contributions from family and friends are often the best way to get the money for a new piece of tech. Of course, asking for money can be difficult and uncomfortable.

Microsoft wants to make that process easier by removing the need to actually talk to the people who might be contributing money to a new computer. They’ve created a program for students called Chip In, which combines shopping for a new computer with a crowdfunding platform. 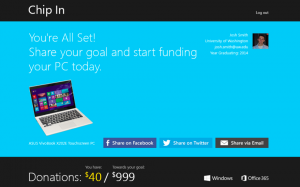 The setup is simple: students go to the Chip In website and choose one of the 20 computers and tablets that have been pre-selected by Microsoft. Microsoft chips in 10% of the price right off the bat, and then students are given a link to a “giving page” to send out to anyone they think might give them money. Once their computer is fully funded, Microsoft ships it to them.

The first 10,000 students to meet their funding goal through the Chip In site will also receive a free four-year subscription to Office 365 University pre-installed on their computer.

The Chip In promotion will run until September 1.