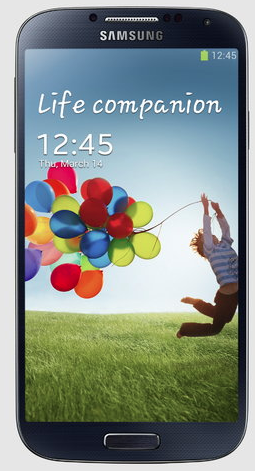 Your life companion is usually a significant other, but Samsung has other ideas.

The new device is “designed to get you closer to what matters in life and bring your world together,” as Samsung puts it — a life companion of sorts.

Many of the new features discussed today were leaked already. But we got details on a release date, as the phone will be shipped at the end of April in 155 countries and for 327 mobile operators (AT&T, Sprint, T-Mobile, Verizon, U.S. Cellular, USM and Leap Wireless in the U.S.).

No prices were disclosed. There will be 3G and 4G/LTE versions available and the phone will initially be in two colors: white and black.

The Galaxy S4 looks very similar to its predecessor, the S3, with a 1080p resolution screen that’s slightly bigger than the iPhone5 at five inches.

There’s a new 13-megapixel camera, along with a 2-megapixel front camera. The new camera can take more than 100 shots in four seconds and you’ll be able to select some to composite into a single frame.

Other neat camera tricks: A “Sound and Shot” feature that lets you record five seconds of audio before you take a photo, and a dual camera feature that takes a picture with the front and rear cameras simultaneously, blending the pictures together.

There’s also a cool S Translator app pre-installed on the phone. It can translate nine different languages that are either spoken or written into the phone. It’s pretty similar to what Google and Microsoft already offer.

For more details, check out these reviews on TechCrunch and CNET.

T-Mobile is already letting potential customers submit their emails to receive updates about the Galaxy S4.

As usual, it will be interesting to see how Samsung’s newest phone competes with the iPhone5. At the end of last quarter, Apple accounted for 39 percent of smartphone sales compared to Samsung’s 30 percent. Samsung is growing quickly, though, and sold 62 million smartphones in Q4 of 2012.

In terms of smartphone marketshare, the latest numbers show Apple gaining ground in both the OEM and platform rankings.

And as for me and my Galaxy S3, well, I’ll probably hold on to it for now. But when it’s time for a new smartphone, I’ll be sure to reach out to you all again.