Those roaming around downtown Seattle and needing to hit the John may soon have a place to go.

The Seattle Times reported today that the city is working with The Alliance for Pioneer Square and a local developer to purchase a $90,000 public toilet called the “Portland Loo.”

Portland installed the first of seven “Loos” back in 2008 and now sells its patented bathroom to other cities around the country.

As Seattle Mayor Mike McGinn outlines in this blog post, the city has partnered with the Alliance to install the Loo at the west end of the “Sinking Ship Garage” near James and Cherry streets and Occidental Park.

The deal calls for Greg Smith, a developer for Urban Visions, to acquire, transport and install the facility. In exchange, Smith would get to add three stories on a proposed building in Pioneer Square. Once installed, the City would lease the Loo to the Alliance, who would pay for maintenance and cleaning. 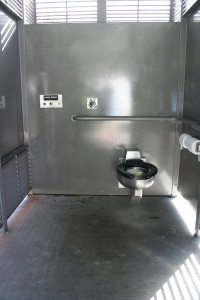 If the Seattle City Council approves the new proposal from Smith, the Loo would be installed in late summer or early fall.

Installing public restrooms in Seattle has been a struggle for the city, which bought five bathrooms a decade ago for $5 million. Those became populated with drug dealers and garbage, with the city eventually selling them on Ebay. When Portland first discussed installing public toilets, it actually used Seattle’s screw-up as a guideline for its Loo project.

If this whole shindig doesn’t work out for the Emerald City again, maybe the Seattle should reach out to The Bill & Melinda Gates Foundation, which is putting up millions of dollars to fund a series of projects that aim to “reinvent the toilet.”

Previously on GeekWire: Congratulations, Seattle: You’re getting a space toilet