If the smartphone wars get decided by time spent using the phone, Apple is winning handily. According to a new report from Experian Marketing Services, iPhone users spend an average of 1 hour and 15 minutes on their phones daily, as opposed to 49 minutes for Android users. 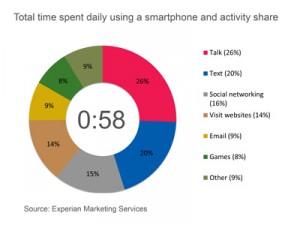 According to the report, the average American smartphone owner uses his or her phone for 58 minutes a day. (No word on how they count day phones and night phones.) Talking on the phone accounts for a little more than 15 of those minutes, making it the biggest chunk of daily use, taking up 26% of the total time spent on a smartphone. Texting comes in second, accounting for 20% of an average user’s time, followed by social networking (16%), mobile web browsing (14%), email (9%) and gaming (8%).

One of the big losers is online video, because only about 2.3% of smartphone users watch videos on their phones in a typical day. If you’re anything like the average user, that e-book app is probably serving the same purpose as your copy of The Universe in a Nutshell, since a measly half percent of all smartphone owners use their phones for reading during the day. 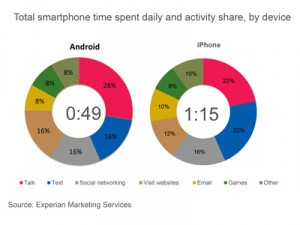 Comparing iPhone and Android shows something interesting: the amount of time people spend talking on their smartphones stays fairly constant (Android users average around 14 minutes while iPhone users average around 17) but the percentage of time using the phone that calls take up changes drastically (26% for Android users, 22% for iPhone users). iPhone users proportionally spend more time texting and emailing than their Android counterparts, though mobile web browsing accounts for a greater percentage of Android users’ time.

According to Experian, iPhone users are also more likely to be shutterbugs, with a greater percentage of their time spent taking pictures.

So tell us: how does your phone usage stack up? Are you an average user, or do you rise above the crowd?