The government may be shut down. But you can’t extinguish the entrepreneurial fire that easy.

In video remarks at the 4th Annual Global Entrepreneurship Summit in Kuala Lumpur, Malaysia today, President Barack Obama stressed the importance of entrepreneurship and he singled out Seattle non-profit UP Global (best known for its Startup Weekend events) to help carry the flame forward. 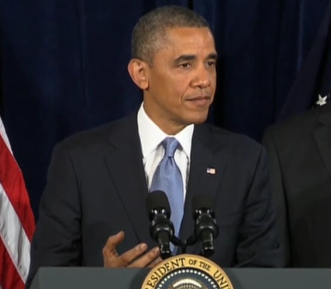 “In support with UP Global, we will help support 500,000 new entrepreneurs and their startups around the world,” Obama noted in the video remarks. “Some of America’s most successful leaders and businesses will serve as entrepreneurship ambassadors, mentoring and nurturing the next generation.”

“Those of you there today, you are risk takers and dreamers who imagine the world as it ought to be, and you also have the talents and drive to actually build the future you see. The United States of America wants to be your partner. We want you to succeed. And when I think of your passion and creativity, I could not be more optimistic about the future we can build together.”

UP Global, whose CEO Marc Nager was featured on the NextCast interview on GeekWire this past weekend, could play a critical role in building that future as the central hub for those entrepreneurial activities.

In a blog post today, UP Global — now consisting of the merged Startup America and Startup Weekend entities — is partnering with the U.S. State Department to establish entrepreneurship programs in 1,000 cities around the world by 2016. That’s up from 500 cities this year.

“This significant increase in entrepreneurship globally will result in stronger communities and leadership at the local level and a more connected and thriving global economy in a world that demands shared prosperity and innovations more than ever before,” UP Global wrote.

This is actually quite fascinating when you think about it.

Entrepreneurship becoming a foreign policy tool of the 21st century — just as the Peace Corps was in the 1960s and 1970s?

It appears as if the Obama administration is driving in that direction in a big way, helped by the innovative and fast-moving crew at UP Global. That’s smart stuff.

After all, entrepreneurship is woven deeply into the American ethos, often driven by immigrants who’ve taken huge risk to pursue their dreams in this country. It’s a spirit and cultural thing, perhaps even more important than the U.S. exports of Hollywood movies and Detroit automobiles.

Entrepreneurship as an export? Now, that’s something interesting to think about.

Here’s more from the blog post on how UP Global will look to pull this off, creating 500,000 globally-connected entrepreneurs in the next three years.