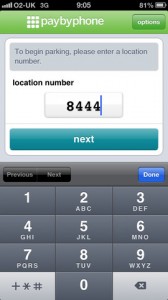 It can be really annoying and frustrating to leave a meeting, meal or similar occasion to go refill your parking meter in fear of receiving one of those awful parking tickets.

But now in Seattle, you can add juice to that meter with a few taps on your smartphone. Beginning today in Seattle’s downtown “retail core,” drivers can pay for parking without visiting their car or displaying a stub.

The City is using technology from PayByPhone, which beat out companies in a “competitive procurement process” and already operates in 180 cities in North America and Europe.

Here’s how it works: Users set up an account on PayByPhone and enter their vehicle license plate(s), cell phone number and credit card payment information.

Then, when you’re ready to park, you just enter in the provided location number and duration of time that you’d like to park for. You can also use the QR code or NFC tag on the PayByPhone stickers at each parking spot to pay quickly.

While you’re away, you can receive a text-message alert reminding you when the meter is about to expire. If you want to refill the meter, simply just use the app to pay more.

Each transaction on PayByPhone will incur a $0.35 charge, but at least to me, that’s well worth having to sprint back to your car in hopes of beating the parking meter police or paying a fat parking fine.

PayByPhone is available for iOS, Android and BlackBerry. Don’t worry, Windows Phone owners — you can still use the service via PayByPhone’s mobile site.

The new service will start between First Avenue, Seneca Street, Ninth Avenue and Stewart Street, eventually expanding to all of Seattle by the end of 2013. This was supposed to be implemented last fall, but more testing was needed for integration with the Seattle Police Department equipment.

Previously on GeekWire: App of the Week: BestParking is a key tool for urban parkers … A place to poo: Seattle may install a $90,000 public toilet downtown