No one goes to Second Life anymore. Long gone are the days where it was a media darling with Second Life millionaires gracing the cover of Business Week. Worlds created by Minecraft and Blizzard have replaced it in popular culture. Second Life is ancient history.

Yet that ancient history is still very valuable as Linden Lab, the makers of Second Life, can testify. Well out of the limelight, the virtual world earned Linden Lab half a billion dollars in 2012. The key to the site’s longevity and success? Being smart enough to create a virtual economy and place it in the user’s hands.

Not satisfied to simply coast on that windfall, Linden Lab has rolled out two interesting projects this year that sync perfectly with the company’s mission statement of making “shared creative spaces.”

Launched in January dio(not to be mistaken with singer of Holy Diver) is a sort of a web-based storyboard platform which allows users to do something as simple as give you a visual tour of their house, or as complicated as telling an interactive fiction story or game.

Imagine the photos on a Pinterest board actually flowing together based on the users actions instead of simply being a group of pictures lumped in the same category. This adventure, titled Beneath the Valley of the Kings, is a good example.

While creative spaces may be their mission, Linden Lab knows the user’s ability to generate revenue is what has fueled the company’s growth.

In an interview with Forbes Rob Hubble, the CEO of Linden Lab, said:

“We want to implement revenue sharing with the content creators of dio to give people an incentive to create interesting spaces. We’re going to give them a cut of the advertising revenue that they bring. We’ve seen that work exceptionally well in Second Life, where users can monetize their own creation…If I create a dio place that’s very compelling and is getting lots of traffic, then I’ll be able to monetize that as a share with Linden Lab.”

The second part of Linden Lab’s two-prong project is Versu.  On the surface, they have created what  looks like a choose-your-own-adventure app powered by an AI engine designed by Richard Evans, who was one of the lead designers for Sims 3. Currently only available for the iPad, Versu is the fruit of Linden Lab acquisition of LittleTextPeople. The free version of the app rolled out with an adaptation of Jane Austen’s Pride and Prejudice, plus one original ghost story by author Emily Short. 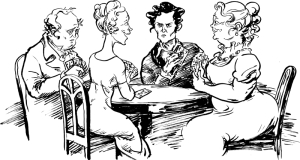 But beyond a taking you through a simple adventure, the goal of Versu is to have the social interactions you, as the reader, have with the characters to constantly be changing.

As Emily Short describes it the characters “opinions” constantly change, “how they act, how they react to you, how they talk to you and talk about you, the relationships you form with them.” This allows for the most important component in any such game: replay value.

Versu has one paid module, also by Emily Short, which is a murder mystery for $4.99. Now, personally, I think that setting any price point with only one original story on the platform is a mistake in timing, especially if the goal is to get people to adopt a new interaction platform. Not that the author shouldn’t get paid, and I hope  that’s where the cost is going, but Linden Lab should know by now the way to get people hooked is to allow them to experience the system. I am dubious that one original tale is enough to set that hook.

But with Versu, Linden Lab is not just after readers. They are after authors who want to help create new titles. Just like with Second Life, the key to Versu’s success will be establishing an economy around creativity.

Will dio and Versu provide Linden Lab the type of success they’ve enjoy with Second Life? I doubt it. In terms of revenue, dio would have to become advertorial based to make real money (think hotels doing walkthrough games). But  Versu has promise if it were licensed or sold. I could see Rakuten or Amazon (Jeff Bezos is one of the original investors in Second Life) as potential buyers.

Either way, the creativity and staying power shown by Linden Lab is laudable. Without forethought and a little luck, they could have just as easily ended up on this has-been list of internet curiosities.