Tony Stubblebine is in the business of helping old dogs teach themselves new tricks.

He’s the co-founder of Lift, which makes an app that tries to help people achieve their goals by building better habits. The way it works is simple: pick a few habits that you want to build and then use the app to track every time you keep up that habit.

Lift then tracks the frequency with which you keep your habits, and provides you with feedback, encouragement and reminders to help you keep the ball rolling. In that regard, the app is similar in some respects to Seattle’s Mindbloom.

Fair warning: there currently aren’t any privacy options available, save for a pseudonym, though Stubblebine says that greater privacy controls are on the road map for “probably this summer.”

Stubblebine was head of engineering at Odeo, where he worked with Evan Williams and Biz Stone, who would go on to be the co-founders of Twitter. Following his stint at Odeo, he went on to found CrowdVine, before leaving to eventually start Lift.

Lift was founded by Stubblebine and Jon Crosby, the former head of engineering at Path, with support from Williams through Obvious Corp., the startup incubator he started with Stone. While Lift has been available as an iPhone app for several months, the company recently opened up a new web app version of the service, so people without an iOS device could get on the habit-tracking train.

I spoke with Stubblebine about Lift’s origins, where the company is going, and why he doesn’t want to sell user data to advertisers:

On how Lift began: “I remember it as an epiphany. I saw this talk from Jesse Schell, who’s a professor of game design at Carnegie Mellon, and he had this phrase, he said in the future, gamification will be everywhere,” he said. “For example, when you’re done brushing your teeth, you’ll get ten points for toothbrushing. It was a really kind of outlandish statement, but I realized: oh yeah, we could build persuasive technology in order to make it easier for anyone to achieve any goal.”

On how user success fuels Lift’s work: “That was the big surprise to us, and has been the most fun part of running this company. Because every day, people are telling us they changed their lives….We look at the success rates all of the time, and there’s absolutely not 100%, like this is the hardest possible thing you can do, to re-wire your brain in order to be a different version of yourself, but we definitely can see the support that Lift brings to it and it’s something we’re pretty proud of, and makes it a fun company to be at.

On how he uses Lift: “My big, ongoing habits are around exercise and health. On the health side, I’m always looking for a diet that feels like it gives me good energy, and on the exercise side, in the last year in particular, I got big into swimming, so I keep track of swimming and other exercise in Lift. And then, beyond that, I just like to get involved in what other people are getting involved in. So, recently, we had some friends who [are] pledging money in exchange for acts of good, so for the last month, I’ve been going around trying to do small acts of good.”

On how Lift (the company) is affected by its employees’ use of the app: “I think Lift is a very coherent company. We’re trying to help people improve themselves by constantly improving an app to support them, and in order to improve that app, we’re constantly having to improve ourselves, and just grow as startup people. So it’s just like everyone is in the exact same mindset the whole time. Every success from the user reflects some success we had in building or expanding the app.” 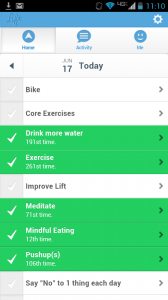 On why he doesn’t want to sell user data to advertisers: “One reason why I want to avoid any reason to sell data is I’d much rather just publish the data in aggregate publicly, because it’s so valuable for the public to know and to be able to compare success rates and tips for various habits. A good example of this is we published last fall some reasearch on the Four-Hour Body diet. We sent 3500 people through a four-week version of the Four-Hour Body … and for the people that completed the four weeks, 86% of them lost weight, and average weight lost was eight-and-a-half pounds. So, to me, that was eye-opening. I had no idea that diet was so effective. So, if you think about all of the people who want to lose weight but who don’t think it’s possible, the value of having that data be public is huge…”

“And so that’s really useful, powerful data, and we get a lot of that, and we’d much rather be in a position, basically we’re planning to be in a position where we can publish that to the public.”

On the perils of complexity: “Evan Williams was super-involved in the early version, and he’s built some wonderful products, and what he said is that it’s the hardest product he’s ever been involved in designing. And I agree with that. there’s a lot you could do, but anyone that we’ve seen do all of it has ended up with something that’s so complicated it feels like you’re managing a spreadsheet, or it feels more like Quicken than something you’d actually enjoy using every day.”

On where Lift is headed: “…we’re calling [them] groups right now, but it’s essentially experts having a platform on top of Lift to push their own advice, and that’s about really doubling down on good information and direction, so that when you’re picking up a habit, you have someone telling you exactly what to do every day.”