Remember the anonymous guy who walks up to random people around the Seattle region and starts taking video of them without explanation? He’s back with a new compilation of his adventures — the fourth in a series and the first in more than six months. Watch it above. 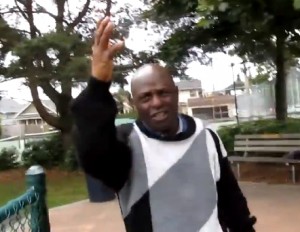 He calls himself Surveillance Camera Man, but we prefer the name Creepy Cameraman because of the effect he has on his subjects.

However, in this latest video, he meets his match in the form of a woman who sets aside her initial exasperation, pushes back by asking the cameraman about himself, poking at him and grabbing his sunglasses. Ultimately she deals with the situation by inviting him to follow along with her and continue recording. It looks like he decided not to take her up on it. It’s a refreshing contrast to the violent responses he gets from others.

Another milestone in this new video: The guy who appears ready to throw a chair at him.

“Be sure to put it on YouTube!” yells another of his angry subjects at the end of the video.

The videos are an apparent commentary on the pervasiveness of public surveillance, which has taken on a whole new twist with the recording capabilities of Google’s Project Glass. The latest video also comes at a time of heightened concern over privacy in general, given the NSA data surveillance controversy.

Along those lines, one fascinating part of the videos is the insistence by many of the people that the Creepy Cameraman needs their permission to record them in public places.

One new twist is the “Surveillance Camera Man” branding at the end, suggesting he’s getting more serious about this project. The original videos in the series have also been updated to include this branding. I’ve sent a message to Surveillance Camera Man via YouTube to see if he wants to talk. If anyone out there has been approached by him with his camera, or knows who he is, drop me a note at todd@geekwire.com.

Here’s one of the earlier videos, as well, including a heated encounter with a man talking on a phone at what appears to be Seattle’s University Village.