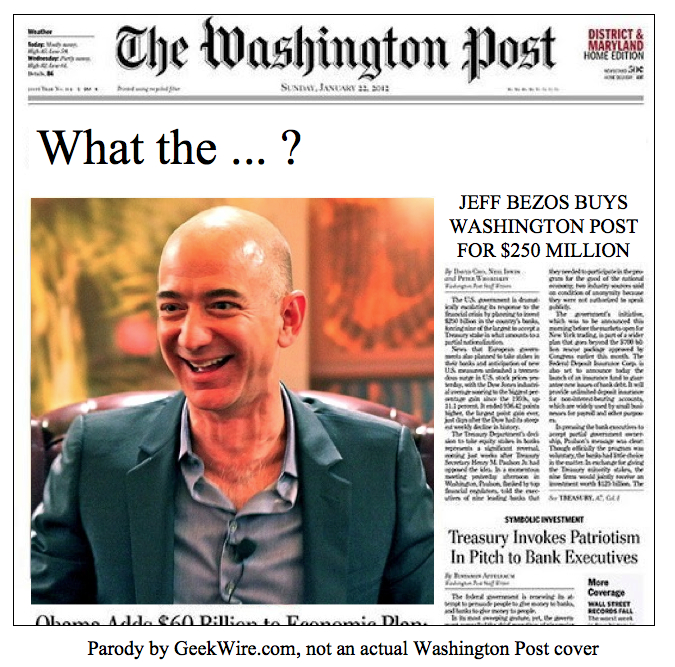 Amazon.com founder Jeff Bezos has emerged as the latest newspaper publisher with a $250 million purchase of The Washington Post, a deal which closed Tuesday when the Graham family signed over the assets of the paper to a private investment company controlled by Bezos by the name of Nash Holdings.

As an old newspaperman and Amazon.com watcher what interests me the most about the purchase is this: Which Jeff Bezos bought the newspaper?

—Is it the guy who runs a razor-thin margin business at Amazon.com?

—Or is it the guy who is building 10,000-year-old clocks in a Texas mountain and recovering space rockets from the ocean floor?

My gut tells me that it’s the latter. In other words, this is more of a vanity investment for the billionaire. (The Post represents less than one percent of Bezos’ net worth, and he’s got some bigger fish to fry at Amazon: cloud computing; tablets; video distribution; same-day delivery, etc.).

That said, it will be fascinating to watch how this plays out and whether Bezos — a libertarian who is known for championing long-term thinking — can infuse the newspaper industry with some of his legendary customer focus. I am not sure that alone will dig newspapers out of their hole, but it at least gives some hope.

The Washington Post Co. will remain intact without the newspaper publishing business and a eventually with a new name, largely buoyed by its Kaplan education business. Some interesting speculation on where the Graham’s will invest next in this story in the Post, with suggestions that the company could use some of its cash to turn into a mini version of Warren Buffett’s Berkshire Hathaway holding company.

Here’s an overview of Bezos via The Washington Post: