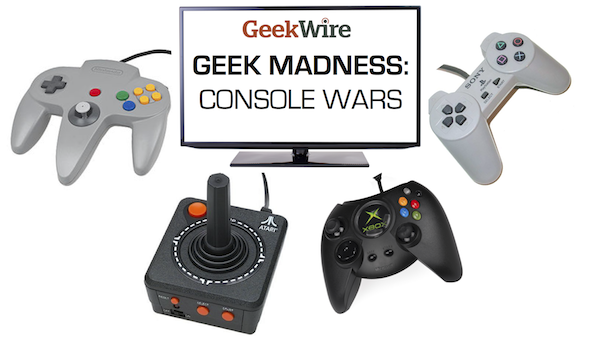 Earlier this year, we asked our readers to help us identify the greatest geek ever. We called it “Geek Madness.” After three weeks of heated competition and thousands of votes, Nikola Tesla trounced Linus Torvalds in the finals to earn the title of Greatest Geek of All Time.

Now, with a new generation of living-room consoles hitting the market, it’s time for another question: What’s the greatest game console of all time?

And of course, there seems to be one logical way to find out. Yep, that’s right. It’s time for Geek Madness: Console Wars.

Just like the original Geek Madness, we’re modeling Console Wars after the annual NCAA basketball tournament — also known as “March Madness” — that pits 64 teams against each other in a big bracket. But for Console Wars, we’ve replaced college squads with some of the greatest game systems ever. Click the image below for the full-sized bracket.

Admittedly, it is difficult to define “greatest.” Does Sony’s Playstation 2 deserve that title because it’s the best-selling console of all time? Or perhaps the iconic Atari 2600 should be the “greatest,” because of the new standards it set for gameplay.

You’ll notice that we purposefully left out the PlayStation 4 and Xbox One. Impressive entertainment machines? Yes. But it’s too early for either of them to be in the running for greatest game console of all time. That’s a distinction that takes years to determine, or at least many months. 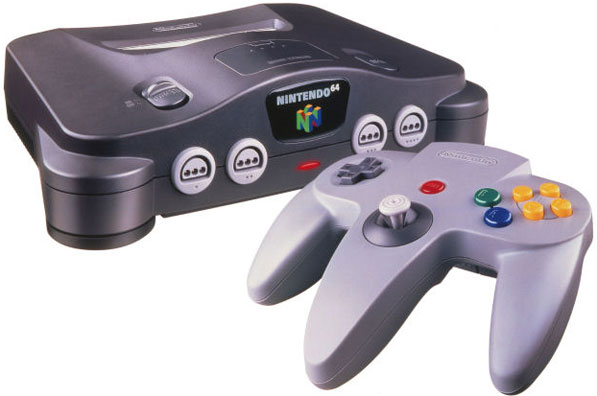 While it wasn’t easy, we picked 24 consoles based on technological advances or sales numbers. In many cases, the chosen consoles qualified for the bracket based on both measures. But we also recognize that this will be a very personal issue for many of you, based on which consoles were most influential in your own lives.

Personally, I’m all about the Nintendo 64. When I think of playing video games as a kid, that was the console. The controller was revolutionary, the games were epic and the N64 was just an all-around beast — the greatest ever, in my opinion. My roommates and I would still rather play Mario Kart than Halo, and that probably won’t ever change.

On the other hand, my colleague Todd Bishop is pulling for the Colecovision, based upon the hours and hours he and his friends spent playing Mouse Trap, Donkey Kong, LadyBug and other classic games on the 1980s-era console. 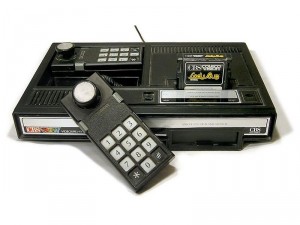 Winners from the first round will advance to play eight consoles already in the Sweet 16 — these ones are on the upper echelon (NES, PS2, N64, etc.) and in our eyes, deserved a first round bye.

Over the next few weeks, we’ll ask you to vote for each matchup. In the end, we’ll have one console from each side — old vs. new — facing off in the final, setting up one epic matchup to determine the greatest game console of all time.

A big thanks to Geek Madness: Console Wars sponsor Nytec for helping to make this feature possible. And without further ado — let the madness begin!

Vote below for the first four matchups, and check back Monday for results:

We kick off Console Wars with a battle between the Atari 7800 and Magnavox Odyssey. Debuting in 1972, The Odyssey is considered the first game console of all time. The device was powered by batteries, did not have sound and featured controllers that looked like small white boxes with knobs both on the top and sides. It played simple games like “Tennis,” and “Hockey,” that look an inspiration for “Pong,” which arrived a few years later. Sales of the Odyssey surpassed 300,000 units. More background info here.

The Atari 7800, meanwhile, came out in 1986 and competed with the NES and Sega Master. It was an affordable console that was something of a successor to the famed Atari 2600.  One nice aspect of the console was its compatibility with Atari 2600 games. Sales of the device reached 3.77 million units. More background info here.

Winner of this one will face Nintendo’s Super NES in the Sweet 16.

A great first-round matchup here between two gaming kingpins: Sega and Nintendo. The Genesis, a 16-bit console also known as “Mega Drive,” arrived in North America in 1989 and faced stiff competition from Nintendo’s SNES and NEC’s TurboGrafx-16. Its most popular game was Sonic the Hedgehog, which debuted in 1991 and went on to become one of the most well-known video game symbols of all time. Sales of the Genesis are estimated at around 40 million. More background info here.

The GameBoy was Nintendo’s first crack at a handheld gaming device and debuted in 1989. It ended up changing how we played games on-the-go and reception was incredibly successful, with worldwide sales estimated at nearly 119 million. Tetris gained popularity at around the same time of GameBoy’s arrival, which helped fuel sales of the handheld device. Nintendo also produced several variations of the GameBoy, including GameBoy Color, GameBoy Pocket and GameBoy Advance. More background info here.

Winner of this one will face ColecoVision in the Sweet 16.

The Intellivision was Mattel’s only console and debuted in 1979. It had an impressive game lineup and was the first 16-bit console. The Intellivision, which competed directly with the Atari 2600, was also the first to bring speech to games as well as the idea of downloadable games. Total sales reached 3 million. More background info here.

Neo Geo arrived in early 1990 and brought arcade-style gaming into living rooms. Its graphics and sound were better than most competitors, but the console was very expensive as a result. Games included NAM-1975, Professional Baseball Stars and Top Player’s Golf. Neo Geo’s controller had three buttons and a joystick, mimicking an arcade device. It competed with the Super NES and Sega Genesis. More information here.

Winner of this will face the NES in the Sweet 16.

Debuting in 1982, the Atari 5200 was designed to be an upgraded version of the Atari 2600. Its controller featured an analog joystick and numeric keypad. The 5200 competed with the ColecoVision — as you can see from the commercial below — and the Intellivision. More background information here.

Meanwhile, the 3DO came about in 1993 and was later called Time magazine’s 1994 “Product of the Year.” However, a high price and lack of third party support kept the console from beating out competing products from companies like Sega and Nintendo.Total sales are estimated at 2 million.  More background information here.