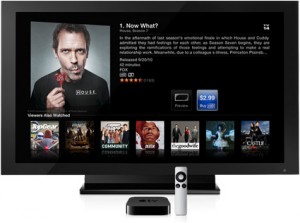 One of the future perks of an Apple TV may be the ability to skip past all those commercials you hate.

According to a report by former Wall Street Journal tech reporter Jessica Lessin, Apple is in talks with executives from television networks and cable companies to allow people to skip ads on television.

According to Lessin, that capability would be a part of a paid premium service, and Apple plans to compensate networks for the lack of ad revenue. The television industry has been notoriously resistant to change, however, and attempting to upend the traditional revenue model upon which the industry is based will be a hard sell for Apple.

Dish Network tried a similar service, called AutoHop, last year, but was quickly sued by the four major broadcast networks. It’s unclear from Lessin’s report how Apple’s service might be different from what Dish was offering.

Even videos served through Hulu Plus, the premium product from the broadcaster-owned streaming video site, still run with ads during the commercial breaks.

If Apple does manage to seal the deal, though, it would be a huge boon for any moves the company plans to make in the living room.