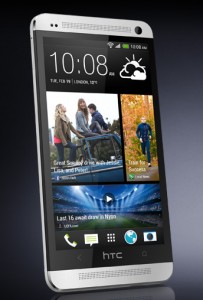 The flagship phone that could put an end to HTC’s sinking profits finally hit stores Friday.

The long-awaited HTC One is available today by AT&T and Sprint, both online and at their retail stores. You can also purchase it at Best Buy, RadioShack, Walmart, Target, Amazon.com, Costco, Car Toys, Sam’s Club, HSN.com, and HTC.com.

Both Sprint and AT&T are selling the 32GB version of the HTC One for $199 with a two-year commitment. Verizon has not announced plans to carry the phone.

T-Mobile, on the other hand, is also offering the HTC One online today and in stores April 24. Going along with its new Simple Choice Plan, which separates the cost of wireless service from the purchase of a phone, T-Mobile customers can pay $99 down and then $20 per month for 24 months to pay off the cost of the phone.

T-Mobile, which has its U.S. headquarters in Bellevue, is offering similar payment plans for the Samsung Galaxy S4 and the iPhone 5, which the carrier just released last week. It’s part of the company’s mission to change the way consumers think about wireless service, and shake up its own business in the process. T-Mobile outlined the new strategy earlier this year and explains in this FAQ:

HTC, the Taiwan-based smartphone maker whose North American operations are also located in the Seattle area, posted weak earnings earlier this month driven in part by the delayed launch of the HTC One. The company’s net income fell to $2.8 million, the sixth straight decline and a 98 percent drop.

One interesting thing about the HTC One is the new “Blinkfeed” feature that comes with the device. Here’s the description from the official HTC blog post: “Blinkfeed brings previously hidden content to the home screen, so you can see the things that are most interesting to you at a glance, without having to open a series of apps.”

Sound familiar? Yes, that could easily be a pitch for Windows Phone. The concept is very similar, although the implementation as a unified feed is somewhat different. (Microsoft’s Windows Phone Live Tiles are still connected to individual applications, surfacing content from each on the home screen. The Redmond company actually tried more of a ‘social stream’ approach in its ill-fated Kin devices.)

HTC is a longtime Microsoft partner that still makes Windows Phones, but branched out some time ago to embrace Android, as well, finding itself in a bit of a tough spot vs. Samsung’s strong lineup of Android devices.

The phone maker has signed up a long list of partners to supply content for Blinkfeed, which will be customizable by the user.

The HTC One is an LTE device with an aluminum unibody and a 4.7-inch HD screen, running Android Jelly Bean. It will face some stiff Android competition this month from Samsung, who will debut its flagship Galaxy S4 phone later this month.