Well, it shouldn’t come as a big surprise that the San Francisco Bay Area ranks on top when it comes to acquisitions of privately-held tech companies. But what’s amazing is just how far out in front the Bay Area is.

At 226 M&A deals in 2012, the Bay Area saw nearly as many private tech companies acquired as the rest of the top five metro areas combined, according to a new report out by PrivCo.

That includes the Seattle area, which placed fifth with 43 deals. Others in the top five included New York (100 deals); Boston (62 deals); and LA (55 deals). Historically strong tech centers such as San Diego and the Research Triangle in North Carolina fell off the list.

I am actually a bit surprised by Seattle’s showing, as 2012 appeared to be a relatively weak year on the M&A front. The biggest deal in the region, according to PrivCo’s report, was the $271 million buyout of IT automation startup UC4, acquired last August by EQT. (They must not be counting the full acquisition price of Double Down Interactive, acquired by casino gaming giant IGT for up to $500 million in January 2012. The deal included $250 million in cash upfront, and the potential of future milestone payments. Earlier today, we reported on some of the risks associated with earn-out deals. See the story here: When earn-outs go bad: Cequint investors sue acquirer for interfering with deal’s potential).

Here are some of the other top deals during 2012. 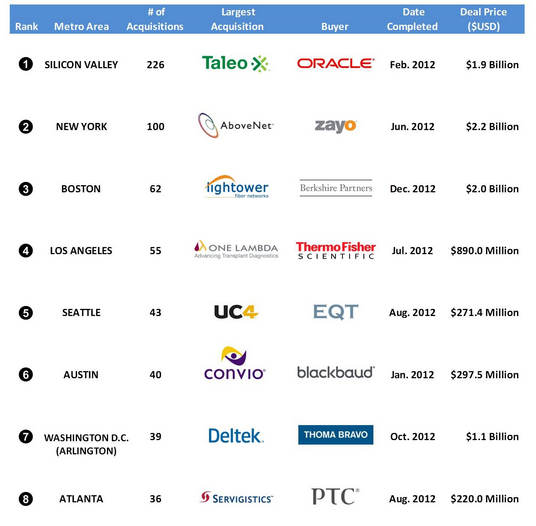