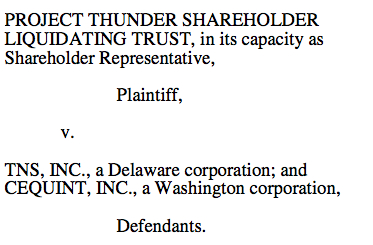 Nearly three years ago, Reston, Virginia-based TNS acquired Cequint in a deal that valued the Seattle caller ID startup for as much as $112.5 million.

At the time, everyone appeared happy. Cequint CEO Rick Hennessey said the acquisition “would accelerate our opportunities and improve the offering to our carrier customers,” while TNS CEO Henry H. Graham Jr. noted in the press release that the combination would create “a very powerful offering.”

But not everything is happy-go-lucky in this post merger world.

TNS’ acquisition of Cequint consisted of about $50 million in upfront cash and stock, with another $62.5 million to be delivered “for the achievement of future performance-based targets.”

Commonly referred to as an “earn-out,” these M&A instruments are used to make sure that top talent hangs around at the acquired company, and that they continue to execute on the business. (Earn-outs also have been used in the acquisitions of Seattle companies such as PopCap and Double Down Interactive).

Now, here’s where the Cequint story gets really interesting.

A group of shareholders, operating under the name Project Thunder Shareholder Liquidating Trust and presumably consisting of top management at Cequint, has filed a suit against TNS alleging that the parent company has “unlawfully deprived” the group of $62.5 million in earn-out payments.

That’s a lot of coin.

The plaintiffs, who are not identified in the suit (see full copy below) but are labeled as former holders of stock, securities, options and warrants of Cequint, argue that TNS interfered with the company’s ability to drive revenue by consolidating the HR and finance departments under one roof. It also impacted future revenues by moving Cequint CFO Scott Frodle and Cequint president Scott Weller to employment positions within TNS.

Meanwhile, the suit says that Cequint CEO Rick Hennessey was “poached” by TNS when he was moved to a general manager position at the company, eventually leading to TNS “stripping Cequint of its entire leadership team.”

The suit goes on to say that the executives — given their new roles at TNS — were left “without meaningful time” to attend to Cequint.

It also alleges that TNS interfered with the launch of Cequint products with Sprint and Verizon, creating “substantial financial losses” as a result.

Reached via email in Spain, Hennessey noted that the matter was likely to be resolved this week. He said that he is not personally involved in the suit, other as a beneficiary if the trust succeeds in the case. He declined further comment.

The case was initially filed in King County Superior Court, but it has since been moved to federal court. The Seattle Times first spotted the suit, with editor Rami Grunbaum noting that it’s unclear whether an earn-out will be part of the recent deal involving TNS, which agreed to be acquired earlier this month for $862 million by investment firm Siris Capital Group.

We’d not heard of this type of dispute before, so we asked lawyers to weigh in (let us know your thoughts in the comments). Josh King, general counsel at Seattle legal directory Avvo, notes that earnouts usually aren’t a good way to structure a deal.

“Regardless of whatever feeling of good cheer and promises of ‘running as an independent operation’ are made prior to closing the deal, the reality is that the ability of the seller to control business outcomes will diminish from the first day following closing.  Conflicts will be abundant even when both sides are acting in scrupulously good faith.

And frankly, earnouts are also more attractive to sellers than they should be.  While it’s appealing to be able to claim that the price paid for the deal will depend on projected performance actually being realized, the seller can pay a steep price in ongoing administrative hassle and conflict.  In my experience, it’s almost always better to simply liquidate all of these things into a single purchase price.”

Here’s the full case (main legal documents begin in the attachment section, and it likely to be interesting reading for all of you legal geeks).