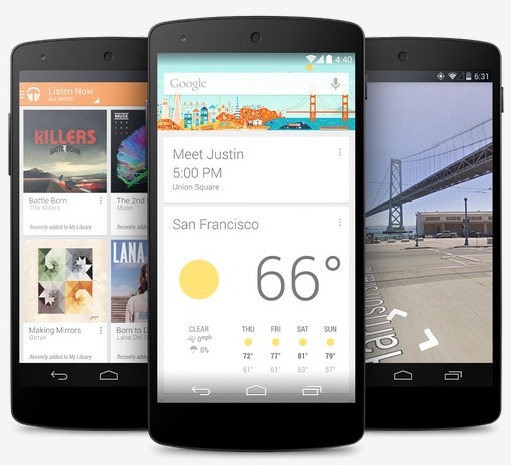 Google’s worst-kept secret is finally secret no more: the Nexus 5 is available for purchase.

The company’s latest flagship Android phone quietly launched today on the Google Play Store, and for the most part, it wasn’t all that surprising. All of the leaked photos and videos that we’ve seen were, in fact, images of the final phone, and now it’s here.

Google’s new phone, which was built by LG, comes pre-loading with Android 4.4 “KitKat,” and features a Qualcomm Snapdragon 2.2 GHz quad core processor, 4.95 inch display, and 16 or 32 gigabytes of on-board storage. The phone comes in white or black, and is available for $349 off contract for the 16 GB model and $399 for the 32 GB model. It boasts an 8 megapixel rear-facing camera and a 1.3 megapixel front-facing camera.

In addition to the new phone’s launch, Google also announced that KitKat will be coming to its Nexus 4 phone, as well as the Nexus 7 and 10 tablets “in the coming weeks.” HTC has said that the HTC One Google Play edition should get its update within the next couple of weeks, while the standard HTC One will get KitKat within the next 90 days.

The Nexus 5 is available on T-Mobile, AT&T and Sprint, but will not be available on Verizon. Like Google’s other handsets, the price of the phone is unsubsidized, and is sold off-contract. However, if you’re looking to pick up one of the 16 GB models, you’re going to have to wait. Google is saying that they’re completely out of stock, with no indication when they might return.