This month’s GeekWire 200 update isn’t so much about who is moving up the charts, but who moved off the list.

We waved goodbye to longtime powerhouse Tableau Software after its spectacular IPO on Wall Street, which has valued the company at more than $3 billion. The company previously ranked 4th on the list. As per the rules of the GeekWire 200, sponsored by Fresh Consulting, once a private company goes public or is acquired, they are no longer eligible for listing.

Of course, having companies “graduate” from the GeekWire 200 is certainly a good thing for the community, and we’re expecting others to follow in Tableau’s path in the coming months.

Who will be the next one to drop? NanoString Technologies (which moved into the top 25 this month, ranking at #24) certainly is a contender since it has already filed paperwork for an IPO.

Another one to watch is INRIX (#4 on the list), the Kirkland-based provider of traffic navigation data which reportedly also is positioning for an IPO. INRIX also may be a target now that its compatriot, Waze, was just gobbled up by Google for a reported purchase price of more than $1 billion.

Big Fish remains on top in the GeekWire 200 for this month, a ranking that the Seattle game maker has held since we relaunched the list late last year. While Big Fish appears to be entrenched in the #1 spot, there were a few other notable movers on the list over the past month.

CreativeLive, the online education startup led by Chase Jarvis and Mika Salmi, which was just in the news this week for opening a new video studio in San Francisco, jumped three slots to #7. Groundspeak, the geocaching pioneer, moved into the top 10, ranking at #9. Another big charger was Seattle corporate wellness app maker Limeade, which jumped an impressive 55 spots to #60.

Meanwhile, Moz — formerly SEOmoz — took a big tumble to #38. But that was more of a technicality. Along with the name change, the company’s new LinkedIn account doesn’t have as many followers and their new domain doesn’t have as many inbound links, which affected their ranking. We fully expect them to climb back up the charts, perhaps reclaiming a top 10 spot.

For those unfamiliar with the GeekWire 200, it is our index of the top privately-held tech companies in Washington state.

It uses publicly available data — including social media followings, approximate employee counts and inbound web links — to generate a ranking of 200 top companies from our broader list of more than 700 Seattle-area tech startups. It’s not a perfect list by any means, but we think it starts to put the Seattle startup community in some perspective.

In addition to our own algorithm, we have been relying on data from Seattle startup Rival IQ for further insights into the movements on the list. For example, here’s a pair of charts showing which companies are having the most success engaging their audiences on Facebook and Twitter. The Facebook engagement data is the total of likes, comments and shares of a company’s posts. 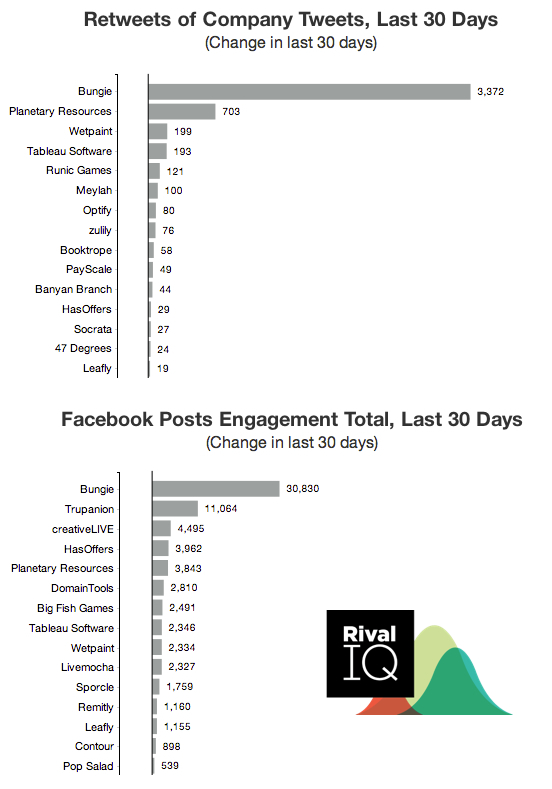 As evidenced by Tableau’s IPO, the GeekWire 200 is a good way to identify the companies emerging from the pack and headed toward public offerings or acquisitions.

Apart from the ranking, the sorting features in the index provide unique insights into the Seattle startup landscape. You can toggle between B2B and B2C startups, or drill down to see the rankings in more than 20 different startup categories.

You can drill down even further to see how the companies rank based on the individual metrics used to calculate the index — seeing which business-to-business software companies employ the most people, for example, or which gaming companies in the Seattle region have the most Facebook followers.

Use the tools at the top of the index to filter based on all of these criteria.