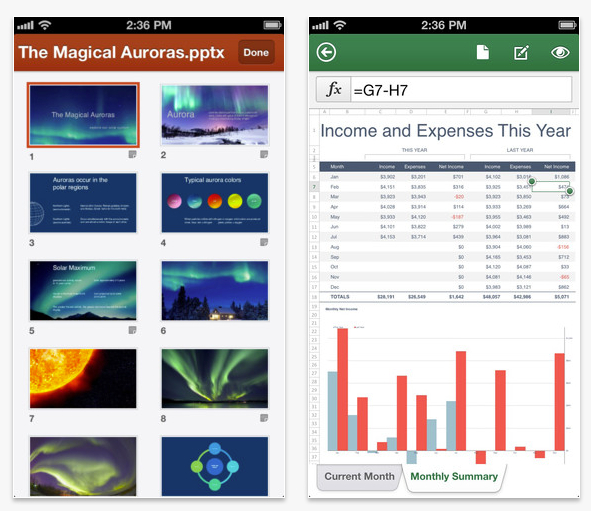 After months and even years of speculation, Microsoft this morning finally released a version of its core Office productivity programs — Word, Excel and PowerPoint — for Apple’s iOS mobile operating system. But it’s designed specifically for iPhone, and the company is still refraining from releasing a native version for the iPad.

Office Mobile for iPhone is a free download but requires a new or existing subscription to Microsoft’s Office 365 service for businesses or consumers. The company describes it as a “mobile companion” to the Office programs, with basic document editing capabilities, similar to what the company offers already on Windows Phone.

From the perspective of Microsoft’s business, the new app is a potential blueprint for expanding Office across a variety of mobile platforms. The company does offer the ability to buy a $99.99/year Office 365 subscription from inside the iPhone app, for people who don’t already have one, but Microsoft isn’t saying if it’s sharing the standard 30 percent cut of in-app purchases with Apple or has worked out an alternative arrangement.

Microsoft says in a statement, “For new customers who register for the Office 365 service as part of securing Office Mobile for iPhone from the Apple Store, Apple does share in the subscription revenue. We do not share details of our business relationships between Microsoft and our partners.”

But the lack of a native iPad version means that Microsoft will still be able to claim Office exclusivity for its own Windows tablets, even as investors press the company to release a version for Apple’s tablet to capitalize on the iPad’s growth. The download page for the new app lists the iPad and iPad mini as compatible devices, but it’s not optimized for them and needs to be magnified to fill the iPad screen.

“For the iPad we have the Office Web Apps, which we think are a great solution for the tablet,” said Chris Schneider, a senior marketing manager for the Office business, referring to the browser-based versions of the Office suite.

Microsoft isn’t saying if it plans to release Office for Android.

In the iPhone version, users can edit, view and share Word, Excel and PowerPoint documents without losing any native formatting. Document creation is enabled for Word and Excel, but not for PowerPoint. Documents can be saved and accessed via Microsoft’s SkyDrive or Sharepoint cloud services for consumers and businesses.

Families can connect up to five different iPhones to one Office 365 account, without counting against Office 365 Premium’s allotment of 5 PCs or Macs per account.

Office Mobile for iPhone is available for download here.