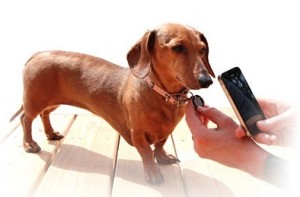 Seattle startup PetHub is expanding in Europe, launching its pet-finding ID tags in 400 retail stores in The Netherlands as part of a push into Europe.

In addition to English, the tags are now also available in German, Dutch and French, with other languages to be supported later this year, including Italian which is coming next.

The tags start at about $10, with silver and gold membership levels which cost $39 and $49 annually.

Led by founder Tom Arnold, PetHub has developed a QR code pet-finding tag that attaches to a pet’s collar. When scanned with a smartphone, the tags take users to a pet’s profile page on PetHub.

Users of the tags also can activate an “Amber Alert” for their pet, sending notifications to local animal shelters and other pet organizations. You can also receive an email notification each time your pet’s tag is scanned, providing physical location of the animal.

Arnold was a guest on GeekWire’s “Elevator Pitch” show last year, telling us a bit more about how he wants to help pet owners find lost dogs and cats. His company has raised $1.3 million to date, and has filed patents on the technology.