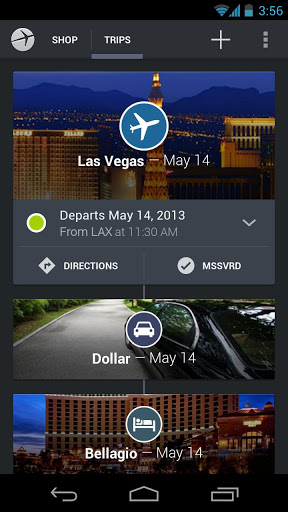 Nearly 18 months ago, Expedia laid out a vision to become a “Web 3.0 personal travel assistant,” for the mobile world.

Now, we’re seeing some of those plans come to fruition.

In what Expedia is calling its “biggest mobile launch ever,” the Bellevue-based company updated its mobile app today with a neat new itinerary feature that gives travelers up-to-date info on everything from flight gate information to car rental confirmation codes.

If you’ve used Expedia to plan a trip, your itinerary is already pre-loaded into the app. The new feature will track your location and provide updated information on things like the status of your flight, airport maps, neighboring restaurants close to your hotel, confirmation codes, as well as help you find a last minute car, hotel or flight while on the go.

The free app, which has more than 11 million downloads, is available on iOS, Android and Windows in 30 countries and
16 languages.

Expedia, which revamped its mobile app back in November, has been hard at work redesigning and improving its different platforms. Earlier this month, the company began testing out a redesign of its website with a focus on bigger photos and less clutter.

In January, as part of its “Find Yours” advertising campaign, Expedia introduced a Facebook app called “Find Your Story“ that allows users easily put together motion pictures with their travel photos. It’s a clever way to help people create shareable memories from their trips.

Expedia, one of the top performers in Seattle tech for 2012, remains the top dog in online travel. The site accounted for 31 percent of all page views in the category and had $4 billion in worldwide sales in 2012.