With more than 1,200 retail stores nationwide, Petco is the top dog in pet care. So, when the big box retailer came knocking — or should we say barking — at the door of Rover.com, the tiny Seattle-based startup certainly perked up.

Some of those initial discussions between the two companies, which started more than year ago, have now resulted in Petco leading a $3.5 million investment in Rover.com. Existing investors, including Madrona Venture Group and Crunchfund, also participated in the round. However, the new funding from Petco will make it one of Rover.com’s biggest investors. Total funding in Rover.com, which now employs 23 people, stands at $13 million.

But this deal is about more than the money.

Petco brings a huge marketing engine with it, one that could help supercharge Rover.com’s online marketplace for dog sitters.

“First and foremost, this gives us a great opportunity to spread the word about Rover to the broader pet community,” said CEO Aaron Easterly. “Our commitment has always been … to become the de facto solution for overnight care. And this puts us in a great position to achieve that.” 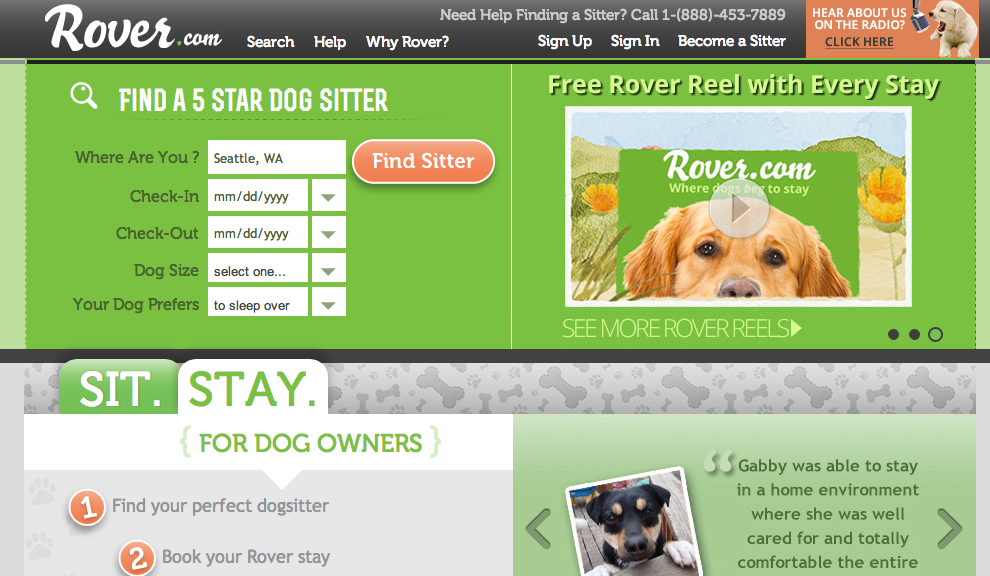 Easterly declined to get into the nuts and bolts of the planned promotional efforts, simply saying that they are looking at a wide variety of things. Even without Petco’s involvement, Rover.com was growing fast.

Easterly, a former executive at online ad giant aQuantive, said revenue is 20 times what it was a year ago. “We are really growing fast,” said Easterly, adding that some pet sitters are making over $5,000 per month via the site.

The company was started by venture capitalist Greg Gottesman at a Startup Weekend event in Seattle in 2011.

Rover.com faces competition from DogVacay, an upstart out of California that raised $6 million in funding from Benchmark last fall. Easterly downplayed the rivalry with DogVacay, pointing out that the biggest competition is people turning to friends and neighbors for pet care.

“It is the least utilized aspect of the pet industry,” he said. “99.9 percent of dog owners purchase dog food, but only 10 percent use commercial services for overnight care. That’s the biggest competitor.”

As a result of the investment, Ted Root, Vice President of Business Development at Petco, will join the Rover.com board.

“Both of our companies share a love for dogs and a vision to provide dog owners with the most affordable, trusted solutions possible,” said Root in a statement. “We are committed to the partnership and excited about the opportunities ahead.”