It’s been just over a year since Chirpify raised its first round of cash and it has been flying high ever since.

The Portland-based startup that allows you to make purchases via your Facebook, Twitter and Instagram feeds just announced a $4 million round today with some new big-name investors backing Chirpify’s social commerce technology. 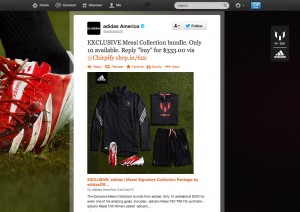 Chirpify will use the fresh funds to expand the reach of its technology past just social media feeds. Within the next few months, the company plans to make a move into live event and TV conversions with a specific focus on sports, music and media.

Chirpify, which is adding more than 300 users per day, makes money by charging transactional and monthly fees. The company landed $2 million in April and $1.3 million in its first round of funding last April. The company has high-profile customers like Green Day, Snoop Lion (a.k.a. Snoop Dogg), Puma and Adidas.