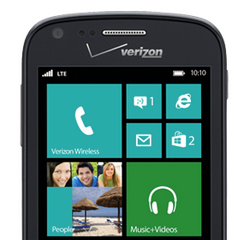 Sprint will launch its first Windows Phone 8 smartphones by this summer, from HTC and Samsung, the wireless carrier announced today. In addition, Verizon says it will be adding its third Windows Phone 8 device, the Samsung ATIV Odyssey, in the coming weeks.

The ATIV device will join the HTC 8X and Nokia Lumia 822 on Verizon’s network.

Sprint, the No. 3 wireless carrier in the country, didn’t say which Samsung and HTC phones it will be selling, but noted that the will work on 3G and 4G LTE networks, with dual-core processors and support for expandable memory. No prices were announced.

The announcements were made at the Consumer Electronics Show in Las Vegas. For the first time in many years, Microsoft isn’t keynoting the show or staging a massive booth, but PC makers such as Samsung are showing a variety of new Windows 8 PCs.