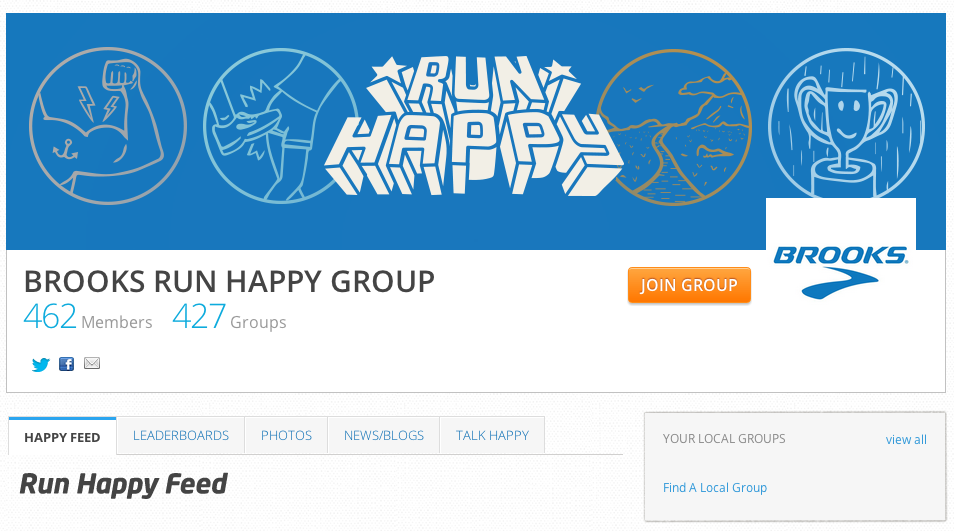 There are all kinds of ways companies today try to encourage people to exercise, be it through gift certificate incentives or charitable donations.

But now Seattle-based Brooks Running Company is doing something a little different, especially for a sportswear company.

The shoe-maker just partnered with the popular MapMyFitness app to launch an online running community called The Happy Run group designed to inspire, educate and connect runners from across the globe.

The group, which is among several you can join via MapMyFitness, allows runners to log a run on MapMyRun — which is operated by MapMyFitness — and share their experience with options like Crushed Goals, Kicked Butt and Finished with a Smile. Runners are encouraged to share their achievements via social media.

After joining, users can also link up with local groups managed by running stores — that presumably also sell Brooks shoes — and find new neighborhood routes with other runners, receive store discounts or see other related events in the area. The Happy Run group also includes features like expertise on running and motivational content.

Austin-based MapMyFitness, founded in 2007, raised $9 million from Austin Ventures last year and has raised $23 million total. Brooks, meanwhile, started all the way back in 1914 and is a subsidiary of Berkshire Hathaway.

Previously on GeekWire: The Most Valuable Pitches (MVPs) from Nike Accelerator Demo Day