Well, that was inspiring — both to the brain and the body.

The Nike Accelerator Demo Day wrapped up Monday afternoon on the pristine Nike campus just outside of Portland. More than 700 investors, mentors, industry leaders, Nike execs and friends packed an auditorium here as ten founders — many of them rocking sweet Nike shoes — pitched their ideas that, in one way or another, leveraged Nike’s exercise technology.

Stefan Olander, Nike VP of Digital Sport, made the opening remarks and spoke about the entrepreneurial spirit of Nike’s co-founders Bill Bowerman and Phil Knight.

“What’s amazing was the way they started,” Olander said of the company’s founders. “They were entrepreneurs just incredibly passionate about running and had the ability to be innovative. It’s that same spirit that we have here today — this ability to really figure out what people need and how to help them get better.”

The demos from all ten startups, who arrived in the Rose City three months ago for an accelerator program put on by Nike and TechStars, were really impressive and many already have a nice chunk of funding in the pipeline.

But there were a few pitches that stood out to me, and here’s why:

GeoPalz: Started in 2010 by three parents, the Boulder, Colo.-based startup offers spedometers that track activity for children and allows them to earn points that can be exchanged for gifts. Parents can also follow their children’s progress and see where they are exercising. Those points can also be used by parents to allow unlocked screen time for kids.

The company added to its product line earlier this year with its iBitz family activity monitors that use BlueTooth low energy (BLE) to sync with smartphones. iBitz also acts as a gaming peripheral for kids to help motivate them to exercise. 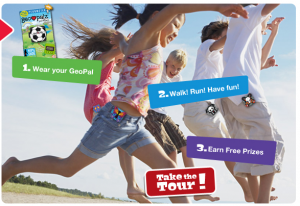 What I liked: If I had to put my money on one company succeeding out of this accelerator, it’s definitely GeoPalz. The founders already have lots of traction with their product (1 million units sold) and loads of startup experience from selling their Jibbitz startup to Crocs for $10 million.

“Imagine a world where kids’ daily physical activity powered up their favorite games and devices,” he said.

Schmeizer also made a huge announcement during his pitch: GeoPalz has partnered with Disney’s Club Penguin game franchise. The company also has plans to get product in Target and Best Buy stores this fall.

Kids can’t seem to stay away from their devices these days. GeoPalz helps them get off their butt, earn rewards and gain screen time with exercise, which is really a win-win scenario.

GoRecess: Fitness classes help make exercise fun and convenient, but can be hard to locate online and the popular ones fill up quickly. 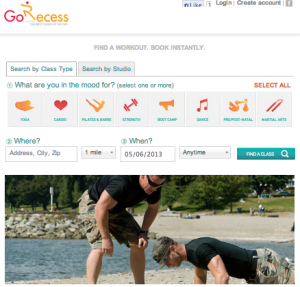 GoRecess, a year-old startup participating in the Nike+ Accelerator, has an answer. It’s like OpenTable or Expedia, but swap the restaurants and flights out for fitness classes. Co-founder Megan Smyth came up with the idea after having difficulty finding workout classes that fit her schedule and preferences.

“If we can so easily find and book a restaurant reservation on OpenTable or find a flight on Kayak or Expedia, why can’t we do the same for workouts?” Smyth asks.

What I liked: Smyth’s pitch was simple and the problem was easy to understand. The co-founder shelled out some stats about the U.S. boutique fitness market — there are more than 100,000 studios in the country in a $24 billion fitness industry. But people often have trouble finding the right class at the right time.

GoRecess seems like a no-brainer solution and I can totally see demand for this. The company put together a polished promo video that showed both boutique owners and customers explaining why they liked the service, that was dubbed “simple, social and rewarding.”

GoRecess’ moneymaking plan was solid — it earns commission for filling up empty seats in fitness studios, for featured class placements on the website, as well as advertising and brand promotions. 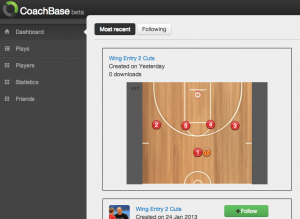 CoachBase: Coachbase is making it easy for coaches to strategize and diagram their winning formulas with a PC, smartphone or tablet. The startup has a platform that allows coaches to draw and animate plays and drills for more than 20 sports and then share them instantly with the rest of the team via email, social media or the cloud.

What I liked: Coachbase did a great job of using the demo to really demo their product in a visual way while touting their pitch at the same time. Founder Keith Rumjahn outlined the huge market opportunity: There are 135 million kids playing sports, and all of them have coaches.

“The problem is, the tools and resources suck for those coaches,” said Rumjahn, who was once a coach himself.

The demo showed off all the neat ways you can draw up plays, drag and drop them to the cloud, and send them to other players. I also really liked Coachbase’s customer validation: They have met with more than 1,000 coaches in the last two months to gain customer insight.

Coachbase currently makes money through its paid app, but Rumjahn also touched on different ways to bring in revenue, like subscription plans and paid premium content like drills and plays from top coaches.

Growing up, I would have devoured content like this while playing in organized sports — it’s a “cool” way to improve, which is why I like the potential here for CoachBase. 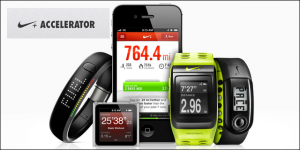 Nike said the goal of the Accelerator was to ”build offerings that inspire and assist people to live more active, healthy lifestyles.” Companies focused efforts on Nike+ FuelBand, Nike+ Running and NikeFuel, with Nike providing technical resources and mentorship. Tech Stars Managing Director Dylan Boyd said there were more than 8,000 pitches given during the three-month process, which were polished down to the final ten today — phew!

The concept is similar to TechStars’ partnerships with Microsoft, which has run specialized incubator programs around technologies such as Kinect and Windows Azure. In the case with Microsoft and Nike, neither company takes a direct equity stake in the companies participating in the portfolio, nor do they retain rights to the intellectual property of the startups. However, TechStars receives a six percent equity stake of the participating companies, which also receive $20,000 in startup funds.

Like I mentioned before, I do think there is potential for each of these companies and it was tough picking my favorite three. I’ll admit I’m a bit optimistic about them being a sports nut, but the sports/tech space is certainly ready to take off, particularly with someone like Tim Cook singing praise for devices like the NikeFuel band.

GeekWire has featured all of the companies — one company, Sprout at Work, never got back to us — and you can learn more about them here:

Six of the startups will continue working in the Portland area, while all ten will head to the Bay Area next week for the second Nike Accelerator Demo Day on June 20.