Steve Jobs may have been “cooler” than Bill Gates, and that’s OK. 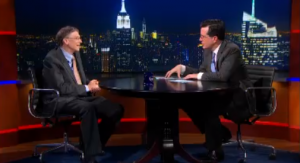 The Microsoft co-founder and chairman made his first-ever appearance on The Colbert Show last night and answered questions about his philanthropy, his days at Microsoft and Jobs.

“I was lucky enough to meet Steve Jobs a few times, and people always say ‘what a cool guy he was,” Colbert told Gates. “You’re out there saving the world, but you don’t have that ‘cool’ factor. Does it ever bug you?”

“He was always cooler than me,” a smiling Gates responded.

“Maybe saving the world will get cool,” Colbert offered.

“It’s OK,” Gates said. “He was brilliant and he had his own style, own approach. Mine, I guess, was a little geekier than his was.”

Colbert also asked Gates if he misses his days at Microsoft and staying up all night writing code.

“You don’t look a day over 40,” Colbert responded. “And I’m not just saying that … because I’m going to hit you up for cash later.”

Gates published his fifth annual letter yesterday and wrote that accurate measurements and clear goals are the keys to improving the lives of poor people around the world. You can check out the full interview with Colbert here.

Previously on GeekWire: Bill Gates says you should read these 5 books in 2013