HasOffers built a pretty impressive business over the past four years, using the company’s revenue to fuel expansion as it grew to 79 employees and added profits to the bottom line.

It marks the first financing in the company, which was started in 2009 by twin brothers Lee and Lucas Brown. The deal was led by Accel Partners, with Founder’s Co-op and RealNetworks founder Rob Glaser also participating.

The money will allow HasOffers to accelerate growth, and focus on bolstering its MobileAppTracking service which is used by companies such as PopCap Games, BigFish, Kabam Games and others.

Raising money marks a big change for HasOffers, and CEO Peter Hamilton did not enter the decision lightly. He met with more than 30 venture capital and private equity firms, and noted that the experience of raising money in Seattle and Silicon Valley was like an MBA in hyperspeed. Hamilton saw an opportunity to be what he dubbed a “category killer” in mobile ad tracking, given that their service has already been deployed with more than 150 major mobile ad networks and publishers.

“A lot of people do marketing analytics — Google Analytics, Omniture and all of these folks provide marketing insights,” said the 31-year-old CEO. “HasOffers really provides a platform for reconciliation with all of these advertising partners, so we are actually communicating the performance back to publishers and ad networks and even social media platforms like Facebook, in order to determine how much advertisers should be paying for the advertising they received.”

HasOffers’ mobile unit is now approaching about half of the company’s revenue, and Hamilton said interest is growing.

“Major brands and retailers are moving into the space, where they want to see what their ad dollars are doing for them on mobile,” said Hamilton, adding that the industry truly needs an “unbiased player” that isn’t running an ad network or selling advertising themselves.

The new funds will help fuel some of that potential growth, with HasOffers hoping to nearly triple sales this year to $20 million. The goal is to surpass 100 employees some time this year, one of the reasons it just took over a hip bar near its headquarters in Seattle’s Belltown neighborhood.

Nonetheless, Hamilton said he’s “terrified” of the company’s bootstrapped culture changing now that the money is in the bank. (The company is a previous winner of GeekWire’s “Bootstrapper of the Year” award).

“I hope that we will continue to carry with us that bootstrapper spirit, and it will underly many of our decisions in the future, because we are not looking to take this VC money, and blowing it in ways that are not really fruitful for the company” he said. “It is one of the more difficult things of moving forward with this partnership, but we also found a partner that understands that and is excited about moving forward on a break-even basis.” 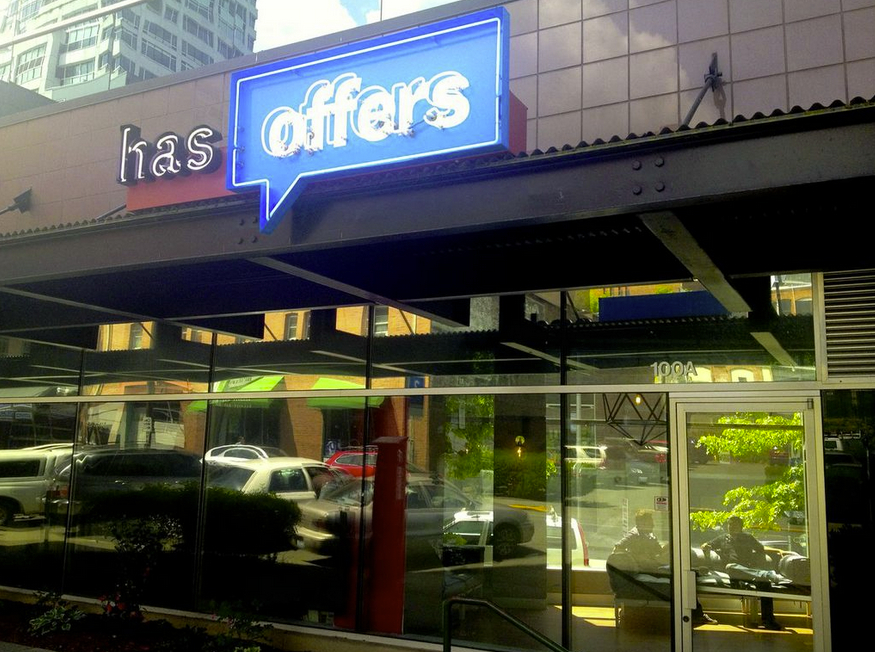 Over the next year, Hamilton said it’s his goal to keep the company near break even and not have an “extreme amount of burn” in its new-found cash.

So, why raise the money? Hamilton, who certainly entertained plenty of VC inquiries over the years, noted that the cash will help them bolster the product, expand overseas and possibly eye acquisitions, something it has not pursued in the past.

“We really want to utilize the venture capital for more strategic moves that we have the possibility of making over the next few years,” he said. “This affords us the ability to step out and look out over the forest, and see what the major milestones are. We never really haven’t had a chance to do that as bootstrappers. When you are working off of your current revenue and balance sheet, you have to make sure what next month looks like before you figure out what the big picture looks like, and this gives us the opportunity to look out over the top and really figure out where we are going.”

Asked what those opportunities may entail, Hamilton didn’t rule out the possibility of acquisitions. “There’s currently a lot of fantastic talent out there, which would be interesting to us,” he said.

As a result of the funding, of Accel’s Rich Wong, an investor in AdMob and Rovio, will join the board. All of the money raised will go to the balance sheet, meaning that the founders aren’t selling any of their holdings in the deal.

“We’re seeing a market shift in online advertising from the CPM or display oriented world of the past to a more programmatic, performance based approach,” said Wong in a statement. “Mobile advertisers are igniting that progression by demanding real user engagement from their advertising partners, and MobileAppTracking provides them with an objective way to evaluate performance of these campaigns.”

UPDATE: More perspective on the deal from Chris DeVore of Founder’s Co-op who notes that HasOffers could become “one of the Pacific Northwest’s next big success stories.”