Newly surfaced patent applications from Apple hint at plans for new types of devices — or at least new shapes of devices — by outlining the company’s vision for curved and non-rectangular lithium battery cells.

“In some embodiments, the curve is formed to facilitate efficient use of space inside a portable electronic device,” says one of the patent filings.

It continues, “For example, the curve may be formed at one or more ends of the battery cell to allow the battery cell to occupy a curved and/or rounded space within the enclosure of a laptop computer, tablet computer, mobile phone, personal digital assistant (PDA), digital camera, portable media player, and/or other type of battery-powered electronic device.”

The other application covers “non-rectangular batteries for portable electronic devices.” The patent filings, originally submitted by Apple in 2011, were made public by the U.S. Patent and Trademark Office this morning, and first reported by Apple Insider.

Apple has been rumored to be working on a smartwatch, among other things, but there’s no reference to anything specific in the filings beyond the general description above. No doubt the “enclosure” in the image below will get lots of scrutiny. 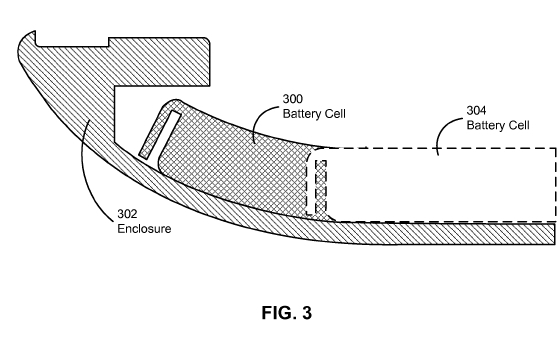