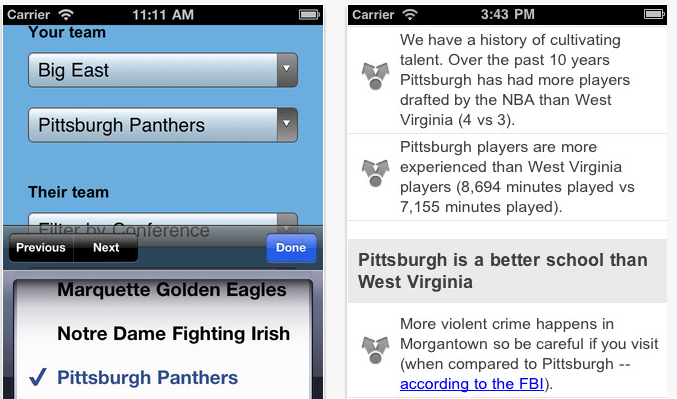 Sure, you love your college basketball team, but how well do you argue against rival fans?

StatSheet’s College Basketball “StatSmack” might just come in handy this time of year. It’s a free app for iPhone and Android. Just enter your favorite team, and the name of another team, and the app returns a list of statistical gems to use at the sports bar or on the couch.

Here’s the down side: Illustrating the malleability of statistics, the app also works in the reverse. So if that Duke fan also has the StatSmack app, he or she can point out that “Duke has a potent offense, scoring more points (78.4 per game vs. 68.9 per game) than Michigan State this season.”

Even if the argument is ultimately a wash, it’s a fun app, and a way to learn a little something new about your favorite team.

StatSmack is also included as a feature of the broader StatSheet College Basketball app, which is packed with all sorts of statistics and useful info about college basketball teams and players. StatSmack is also available free on the web.

Listen to the segment via the audio player below.