It’s a new attempt by the company to court corporate customers, operating much “further up the stack” than Amazon Web Services typically does with its cloud infrastructure. Existing companies in this part of the market, known as Virtual Desktop Infrastructure, include Microsoft, IBM, Citrix, VMWare and Oracle.

Features of Amazon WorkSpaces include persistent sessions, letting users put down one device and pick up where they left off on another, because all of the data lives in the cloud.

Andy Jassy, the Amazon Web Services chief, introduced the service this morning at the company’s re:Invent conference in Las Vegas. Amazon will try to undercut other virtual desktop vendors, with Jassy saying that the company is aiming to charge about half the price of competing service.

From the AWS WorkSpaces site, here’s how the pricing and features break down. 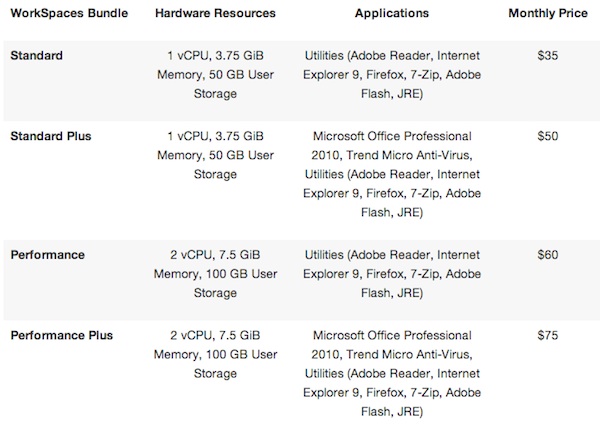 “You get to live that dream of centrally managing your desktops, which makes it easier to manage and better from a security standpoint, but no hardware, no software, no infrastructure, no long-term commitments,” Jassy said on stage at the event. “The operational performance will be consistent, which has been challenging in the old virtual desktop environments.”

During his talk, Jassy poked at “old-guard technology companies” including IBM, which recently launched an ad campaign touting its size vs. Amazon Web Services, and has put the ads on trucks in Las Vegas to “protest” the AWS conference, as Jassy put it.

“The advertising is, uh, well, it’s creative, I’ll say that,” Jassy said on stage today. “I don’t think anybody that knows anything about cloud computing would argue that this company has a larger cloud computing business than AWS.”

Without mentioning the company by name, he called it a way for IBM “to jump up and down and hand-wave, and try to confuse customers.”

Post updated with additional information on the WorkSpaces packages.