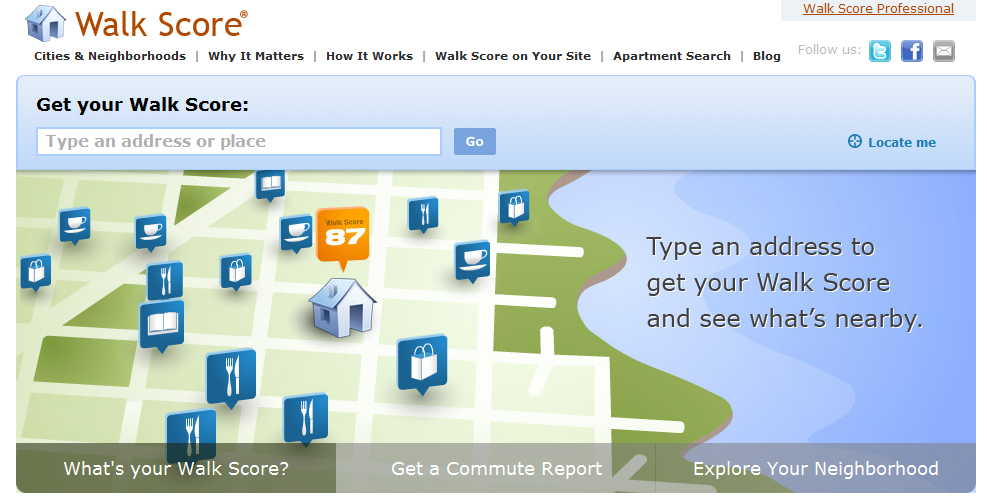 As gas prices soar and commute times lengthen, Walk Score CEO Josh Herst thinks Americans are going to ditch their cars in larger numbers. Instead, he believes they will demand “more walkable places to live with commutes that don’t suck.”

If that trend occurs, it could be very good news for Walk Score.  And some prominent investors are lining up behind the movement.

Walk Score just secured a $2 million first round of financing from a group of Seattle angels that includes former Amazon.com CTO Shel Kaphan, former Facebook general counsel Rudy Gadre, entrepreneur Edward Yim and others. Seattle super angel Geoff Entress, a backer of Cheezburger, Dashwire and dozens of other companies, led the round and is joining the board, GeekWire has learned.

Walk Score was started by former All Star Directories CEO Mike Mathieu under the umbrella of Front Seat Software. As a result of the financing round, Walk Score is becoming a separate company. Mathieu remains an shareholder and investor.

With the funds in place, Herst said that they want to continue “to build Walk Score into another Seattle-based leader in the real estate market.”

Walk Score’s service — which assigns a score on a scale of 1 to 100 for every address in the U.S., Canada, Australia and New Zealand based on the proximity to amenities such as theaters, restaurants and transit — currently is used by more than 10,000 real estate Web sites. Customers include Zillow, Windermere, John L. Scott Real Estate and Estately.

“Nobody is doing a good job of helping people with this search criteria,”  Herst tells GeekWire. “For the most part, the experience of trying to find a place online continues to be all about price and bedrooms. Over the past few years … we have aggregated a large and unique collection of proprietary data and search technology that we believe positions us to really address this market opportunity.”

Walk Score is attracting about 700,000 visitors a month to its Web site, and it is showing about four million scores each day on behalf of clients. The company plans to use the cash infusion to invest in improving the Walk Score algorithm, as well as enhancing the new apartment and rental search service. Last year, the company rolled out a new service that allows apartment dwellers to calculate commute times between two destinations.

Walk Score makes money through online advertising on its own site, as well as licensing the technology on a subscription basis to real estate companies. Licensing starts for as low as $25 and goes into the thousands of dollars depending upon the size of the site. Herst — who previously worked at Madrona Venture Group and founded TripHub — said he sees opportunities to growth both sides of the business.

Matt Lerner, chief technology officer at Walk Score, said there are a number of services that offer point-to-point directions. But he said few take such a broad view of commute times, an area that he says is extremely hot right now.

“We think there is so much more we can do with commuting, not just in terms of time, but also cost because transportation is often the second largest household expense,” he said.

Asked about whether Walk Score could calculate the new tolls on the state route 520 bridge, Lerner matter-of-factly said: “Yes, we should do that.”

Overall, Herst sees big things ahead for Walk Score. “Ultimately, looking forward, we believe that the Walk Score data will be essential for people in deciding where to work, live and play,” he said. “There are opportunities across that spectrum.”