Maybe all of that incubation really does pay off. Vizify, a Portland startup that had the unique honor of participating in both the Portland Seed Fund and TechStars Seattle incubation programs, has landed $1.2 million in startup capital.

It is a bit unusual to see a tech startup participate in more than one incubation program. And Portland tech blogger Rick Turoczy said that he wanted to attract the Vizify guys into a third, the Portland Incubator Experiment (PIE). But Turoczy joked that “three accelerators seemed a little too much to handle.”

“Vizify is attacking an interesting space,” says Turoczy, a fan of the service who has no formal affiliation with the company. “They’re taking the magic of the incredibly popular infographic format and making it accessible to everyday folks. What’s more, they’re helping people make their personal information prettier, more digestible, and more relevant to potential employers and clients.”

As co-founder and CEO Todd Silverstein explained during his TechStars pitch, the company is all about helping individuals make great first impressions. It does this by sucking in information that individuals already create and share online on social networking sites, turning that data into easy-to-consume visualizations. 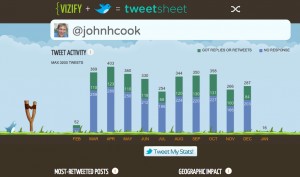 One of Vizify’s first offerings is the Tweetsheet, which turns your Twitter activity into a personal infographic. But Vizify has much bigger plans in store.

“We believe that the proliferation of information about people that is being published online, and accessible through API will break the traditional way of creating and managing how that identity is portrayed,” Silverstein tells GeekWire. “We’re working on something more sustainable and useful to people that puts them in control and are really focused on what we think would be the digital equivalent to real world first impressions.”

Added Matt Shobe, an investor in Vizify who previously worked at Feedburner and Google.

“Online identity isn’t a done deal with today’s services; there’s ample room to improve how you present a more compelling profile of who you are and why you matter,” he said. “I love how creatively the Vizify team has approached their work so far and I think they’ve got the right mix of passion and skill to see their concepts through to realization.”

Based in Portland, Vizify at this point is comprised of the three founders: Silverstein; Jeff Cutler-Stamm; and Eli Tucker.

Here’s a look at Silverstein’s pitch from the TechStars Seattle Demo Day in November.