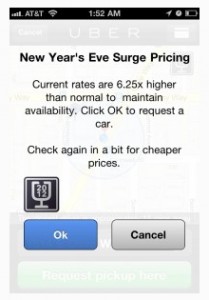 We had a feeling that some Uber users would wake up with a different kind of hangover on New Year’s Day. The popular private driving service, which operates in Seattle, San Fran, Boston, DC, New York, Chicago and Paris, announced a few days before the holiday that it would be implementing so-called dynamic pricing.

In other words, it planned to boost prices on New Year’s Eve as demand for the company’s private drivers rose.

But not everyone got the message, and as  you can imagine some folks weren’t pleased with paying as much as a $75 for a two minute and 16 second ride. In Seattle, the average customer typically pays $15 to $20 for a ride, and we’re reaching out to Uber to find out how much folks paid on average on New Year’s Eve.

Uber did warn customers with email messages and Tweets before the holiday, and anyone who was a candidate to pay the higher fees on New Year’s Eve got a splash screen warning him or her of the high prices.

However, not everyone saw those splash screens when they logged on to Uber’s mobile app (or perhaps they were just too wasted to pay attention). An Uber engineer explained on Quora what happened on New Year’s Eve, with a glitch causing a small percentage of riders to not see the warning about higher prices.

There were also some issues last night with the messaging that affected a tiny subset of users. My back of the envelope calculation shows a fraction of a tiny percent of users were affected (<0.01%). Two distinct race conditions cropped up as a result of unprecedented demand and supply on the system we had never seen before. These bugs occasionally lead to some people being able to request rides without seeing the dialogue about surge pricing. Obviously this is a huge problem in our eyes, and we are (literally as I type) grepping through logs to determine what users took trips when price was elevated but didn’t see the messaging. We will be dealing with these users on an individual basis to make up for this mistake.

One of the guests at a New Year’s Eve party I attended in Seattle used Uber to get to the party, but had no idea about the plans for surge pricing.

Did you use Uber to get around on New Year’s Eve? What do you make of dynamic pricing, which has been used in the airlines for years?

UPDATE: Uber said that surge pricing was in effect in Seattle on New Year’s Eve and demand was as high here as in other cities. Here’s more from the Uber team in Seattle:

For the majority of the evening on NYE we were at normal prices. We only implemented dynamic pricing when the surge of demand threatened to take up all the Ubers on the road. Most of the dynamic pricing happened after midnight when people flooded the system at the same time.

The average Uber fare is about $20 and remained at that level most of the evening. After midnight when the surge of demand hit, dynamic pricing was in effect starting at 1.25X the normal price and climbing up to 7X the normal price.

As soon as the surge of demand subsided, around 3:00 AM we lowered the prices back to our normal rates. We don’t implement dynamic pricing unless there’s a surge of demand.