RealNetworks founder Rob Glaser, who helped usher in the era of online video and audio, now wants to reinvent the phone call as we know it.

“Basically, if you think about the phone call, it has been the same thing for 50 years,” said Glaser, noting that the first preview of the touch-tone phone was at the 1962 Seattle World’s Fair. “We think we can do the next reinvention on top of that. It almost feels like Manifest Destiny that we have to do it.”

To help that dream become a reality, Glaser today is taking the wraps off a new service called Sidecar.

When two users have installed the free app, now available on Android and iOS, they can share photos, contacts and location information all while talking during the call.

“How many times have you said: When I get off the call, I’ll send you that? Well, how stupid is that?” says Glaser. “That’s one of the reasons why we called it Sidecar because it is kind of like that. You have all of these things that you are doing alongside the phone call, and they ought to just be there to get access to whatever you want.”

The company also is touting what they dub “See What I See Video,” a feature in which users can share real-time video of things they are seeing, say a new apartment or the scene at a night club.

“We thought 2-way video calling was cool — like what Tango or Skype does — but it was really just scratching the surface, said Glaser, the chairman of Sidecar. “There were all of these scenarios where you might want 1-way video, like for instance if someone is at a location showing me something, I want to see the proposal for a new office location for us, or the couch that the other person wants to buy.” 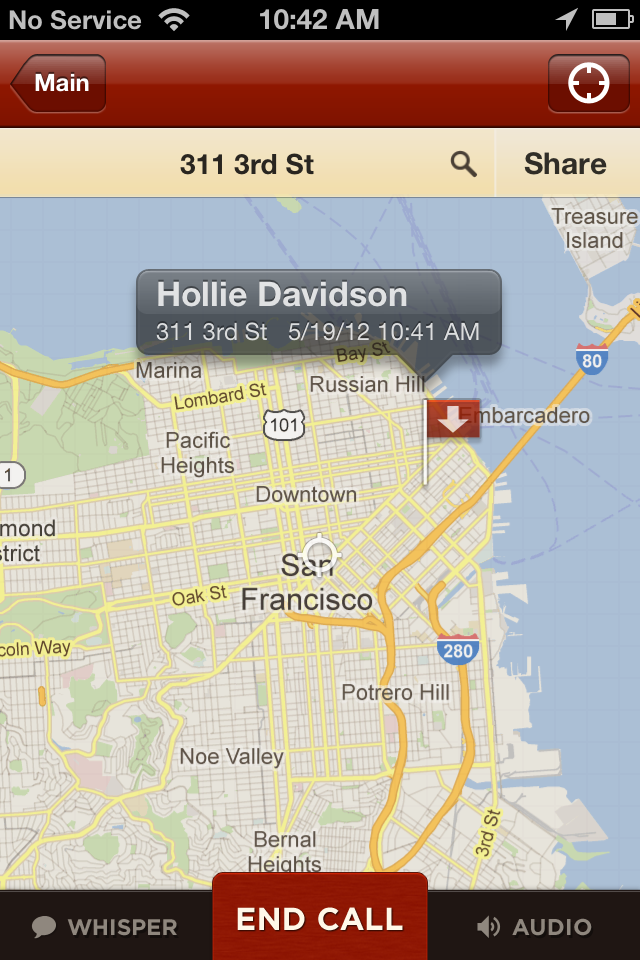 The company — co-founded by Glaser and former Avogadro CTO Rob Williams — isn’t a new entity. Originally started as SocialEyes and bankrolled with $5 million from Ignition Partners and others, it switched directions last year to take advantage of what Glaser and Williams believed was a much bigger opportunity.

Originally, SocialEyes was conceived and built as a Web-only video conferencing application, in part because they struggled to make the service work between the Web and mobile.

A frustrating technical challenge, Williams said they got trapped on the Web and quickly realized that they’d rather be on mobile. “That was a big factor in what was leading us to thinking about pivoting,” he said.

“It was a combination of: Is this a billion dollar opportunity? Answer, probably not,” said Williams of the SocialEyes idea. “And, secondly, oh my God, mobile is a huge opportunity, and we are not spending any time at all…. In the end, we decided to burn the boats and go completely mobile.”

While Sidecar does allow those who have not installed the app to receive phone calls, one big challenge facing the company is the age-old chicken-and-egg problem. After all, for the most desirable features — such as the 1-way video or contact or photo sharing — both parties must have the app installed.

While Glaser said that they’re designing Sidecar for mass appeal, he noted that the company could attract millions of users if it just connected with smartphone-loving Generation Y users. He also pointed out that more than half of Americans now own smartphones.

“The assumption that we wanted to make was that the person that you were talking to has the same class of device that you have,” he said.

Sidecar is looking to make money through premium add-ons as well as advertising.

“My experience is that you can make plenty of money with things that are free,” said Glaser. But he said the first step is to attract a big audience of “active, happy, loyal, virally-engaged users who bring in everyone else in their phone book because it is better.”