We’ve been covering a number of high-tech office expansions in the Seattle area in recent months, from Google’s plans in Bothell to HTC’s moves in Pioneer Square to Amazon’s ambitious redevelopment in the Denny-Triangle area of downtown Seattle to Zillow’s downtown Seattle expansion to Concur’s HQ relocation to Bellevue. 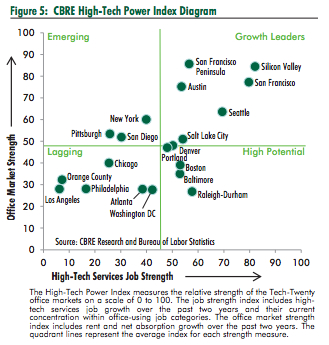 Let’s just say it’s getting hot out there, despite this summer’s cool temperatures.

The momentum does not appear to be slowing down either, as we’ve heard rumblings from real estate sources that both Facebook and Zulily are on the prowl for even bigger chunks of office space in Seattle.

Now here comes a report from CBRE Global Research and Consulting that attempts to put the high-tech real estate boom in perspective. Interestingly, the report finds that Seattle’s South Lake Union neighborhood is the No. 1 submarket in terms of overall demand for tech space, also described as net absorption as a percentage of building stock. South Lake Union saw a 22 percent improvement, ahead of Portland’s Hillsboro area at 19 percent and San Francisco’s SOMA neighborhood at 11 percent.

This could be due to the fact that the South Lake Union neighborhood continues to undergo a radical overhaul, from a forgotten pocket of the city known for traffic bottlenecks into one of the hottest tech spots in Seattle. Amazon.com, as well as a cadre of tech startups such as Glympse, Zipline Games and the portfolio companies of TechStars, have set up shop in the area in recent years, transforming the area with an entirely new look and feel. (Previously: Seattle mayor touts South Lake Union as an ‘engine for job growth’)

In terms of the overall market, Seattle ranked behind Austin and Silicon Valley in net absorption growth. However, and this might be a good situation for tech companies, rents aren’t increasing in Seattle like some other tech hubs.

In fact, the report found that rent growth in Seattle over the past two years is actually down two percent, despite a boom in tech jobs. That compares to San Francisco and New York, which saw rents grow by 41 percent and 22 percent, respectively, during that same period. Of the 20 cities studied, Seattle ranked 14th in terms of rent. (Sorry, landlords).

“With the high-tech economy growing nearly six times faster than the national average, we expect that these submarkets will continue to outperform, helping to counterbalance tepid job growth in other sectors and the uncertain economic environment,” said Colin Yasukochi, CBRE’s director of research and analysis.