Seattle is the best place in the nation for workers in the age range of 18 to 29, according to a new study by PayScale. The report found that Seattle outperformed other tech hotbeds, including Boston (#5), New York (#7) and San Francisco (tied for #9).

The report also found that Gen Y workers tend to prefer smaller firms which provide more flexibility and an opportunity to embrace entrepreneurial ambitions. In fact, 47 percent of Gen Y workers are employed by firms with 100 employees or less. Nonetheless, some of the biggest tech companies on the planet ranked high in terms of the best companies for 18 to 29 year-olds to work for. When considering factors such as pay, job satisfaction, percentage of Gen Y workers and a “green score,” Qualcomm, Google, Medtronic, Intel and Microsoft came out on top.

Interestingly, two of those companies, Microsoft and Google, have major operations in the Seattle area.

Katie Bardaro, PayScale’s Lead Economist notes that Seattle’s growing technology and engineering community is a big reason why the Emerald City performed so well in the report.

“Seattle is a hub for tech, which includes IT, Engineering and Biotech. These are not only growing fields, but fields that pay well and fields that tend to hire recent college graduates. For that reason Seattle offers plenty of job opportunities and lucrative ones too. Additionally, Seattle is a top place for startups, which are attractive to Gen Y due to the ability to play an active role in a company’s success, as well as the perks offered by these small firms. Seattle has seen tremendous wage growth since the end of the Great Recession. Wage growth is a signal for labor demand and thus hiring. In today’s economy, any city that is actively hiring is attractive, especially to Gen Y since they are tremendously underemployed and unemployed compared to previous generations at their age.”

Here’s a look at the ranking by PayScale. 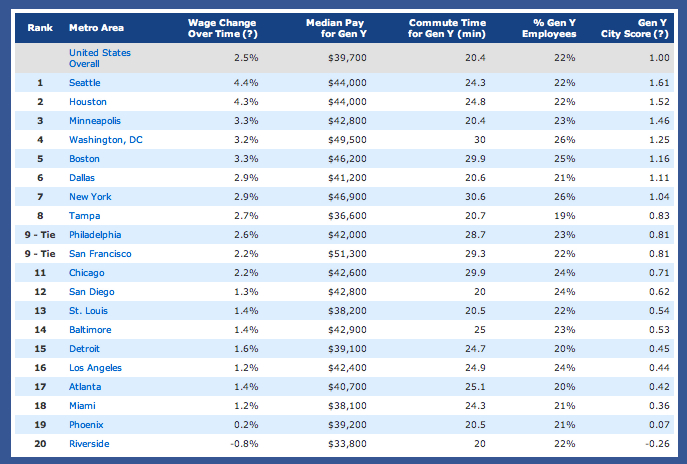