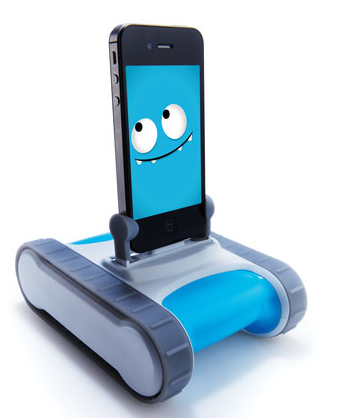 Romotive today is unveiling its next-generation smartphone-controlled robot, a $150 device that the company says is faster and “more sleekly designed” than earlier versions. It’s also announcing $5 million in funding from Sequoia Capital, Crunchfund, Ron Conway’s SV Angel and others.

Incubated at TechStars Seattle, Romotive moved to Las Vegas shortly after the program concluded as part of Zappos CEO Tony Hsieh’s “Downtown Project.” It now has 18 employees who are living and working together in a Las Vegas apartment.

We got a first-hand look at the Romo device last year when we bumped into co-founder Phu Nguyen at a geeky tech event in Seattle. It’s certainly one of the more entertaining projects we’ve encountered.

In addition to the new funding, Romotive just kicked off a new campaign on Kickstarter.

Now, you may wonder why a company that just raised $5 million from Silicon Valley’s top VC firms would turn to Kickstarter for a $100,000 campaign. But the company’s creators say there is just so much more they’d like to do with the community’s support. They write in their Kickstarter pitch:

Now that we’ve got a bigger/faster/stronger robot, we need your help to develop software that will make him even better. We’ve created great basic apps for Romo, and he’s super fun to play with. But we have a bigger vision. We want to create really advanced software that lets Romo do the things robots do in the movies.

Some of the things on their list include: Remote 2-way telepresence; computer vision; autonomous navigation; and facial recognition.

Now, that’s the kind of stuff you really only see in the movies.

Here’s a look at the new Romo: