With a name like Coffee & Power; an investor list that includes Amazon.com founder Jeff Bezos and a co-founder who previously worked at RealNetworks, you’d think that the tech-oriented co-working space would find a natural home in Seattle.

But Coffee & Power, a unique blend of online marketplace and coffee shop workspace, is getting cozy in Portland. The upstart just announced that it plans to open its next location at the Urban Grind Coffeehouse in Portland’s Pearl District. It marks the third “workclub” for the organization, which was started in San Francisco three months ago by former RealNetworks VP and Second Life founder Philip Rosedale. (It also operates in Santa Monica). 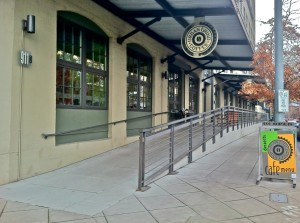 “Coffee & Power is a great fit for Portland,” noted Dian Crawford, owner of the Urban Grind Coffeehouse. “Our attitude here is very much one of collaboration and community.”

Those remarks were echoed by tech blogger and startup guru Rick Turoczy who noted that Coffee & Power is the perfect establishment for Portland.

“With our independent workforce and early stage startups, this is the exact kind of venue that will help support and fuel the startup scene around here,” Turoczy said.

Now before the coffee snobs and tech geeks in Seattle get into a tizzy, I am told that Coffee & Power is actively scouting possible locations in Seattle as well.

“We’d love to have a C&P Workclub in Seattle. We’ve been keeping our eyes open for potential spaces there and in other techy-focused cities like Chicago or NYC,” says Coffee & Power’s Jeska Dzwigalski, adding that they are open to suggestions on coffee shops that might make good partners. (I’ve got a few in mind that would make a good fit, from Uptown Espresso in South Lake Union to Zeitgeist Coffee in Pioneer Square).

The Coffee & Power concept is a bit hard to grasp, since it combines an online marketplace in the style of TaskRabbit and Zaarly with a coffee shop culture and co-working space.

Here’s how the organization describes itself:

Coffee & Power is an online marketplace where people can buy and sell small jobs, enabling a new breed of mobile workers to connect in a way that’s fast, low-friction, and fun. Coffee & Power’s innovative marketplace includes its own payment system, live communications and public chat, a game-like rating and review system, and a several real-world facilities where users can meet and work together.

In many cases, the Coffee & Power interactions don’t require physical meetings. But in others, including things like language lessons and Halloween costume design, members of the community gather at the physical space.

What do you think? Could this actually fly in Seattle?

To celebrate the Portland opening, Coffee & Power will host a talk by Urban Airship CEO Scott Kveton on March 14th at Urban Grind. Other investors in Coffee & Power include Investors include True Ventures, Mitch Kapor, Reid Hoffman, Kevin Rose, and others.