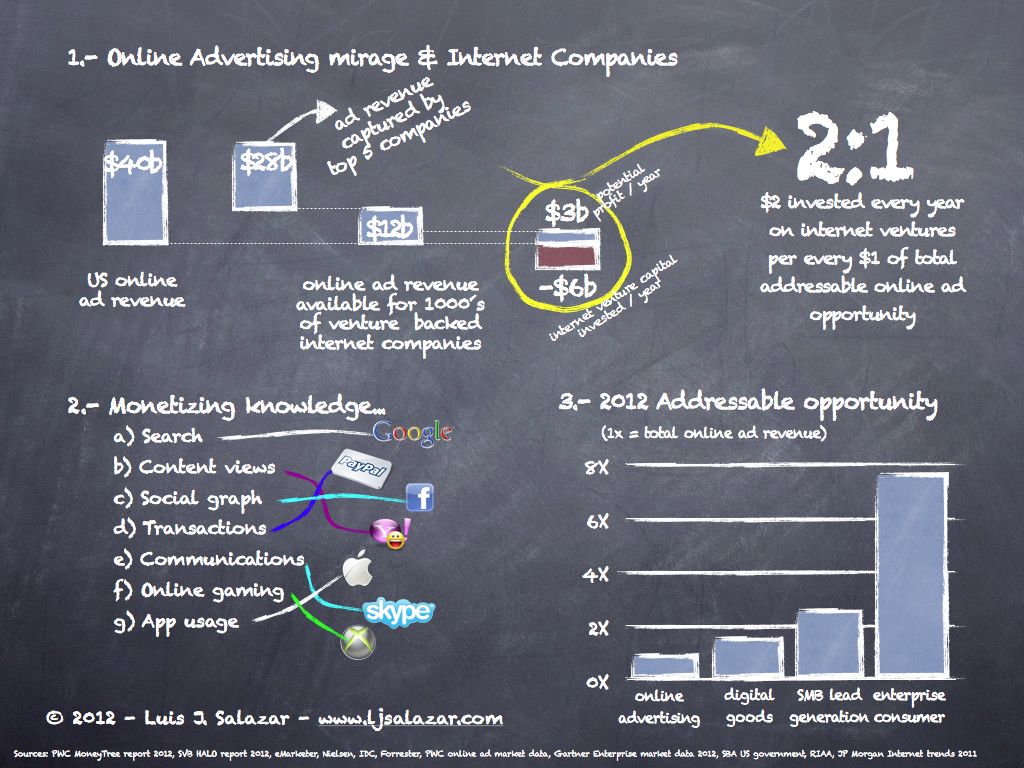 The venture capital industry invested more than $125 billion in Internet-related companies between 1995 and 2012, and since just five companies (Google, Facebook, Yahoo, Microsoft and AOL) command two-thirds of the total online advertising revenue.

Even if we assume a healthy 25 percent net profit in Internet companies after traffic acquisition costs (OPEX and CAPEX) advertising as a monetization mechanism would not pay for all the money spent by corporations and venture capital in that period, regardless of the size of the online audiences built (See: Internet companies and the billion money drain).

At some point, display advertising becomes intrusive and as we move to mobile devices, there are many other issues related to mobile web monetization challenges.

The continuous price erosion and engagement challenges are evident when despite the poor user experience, Yahoo! adds more display ad units per page, Facebook serves up to 20 ads per page, and LinkedIn follows a trend with more than 10 ads per page in addition to their job posting related ads.

Beyond online advertising, there are three key areas of potential revenue for Internet companies. “Knowledge Monetization” is at the center of each one:

More than $120 billion is spent annually in non-online advertising mechanisms in the U.S., and a portion of that will continue to migrate online as new methods beyond display advertising and search are devised. This is particularly important in the SMB segment where more than 27 million small businesses in the U.S. rely on basic lead-generation mechanisms while they continue to expand their online presence.

Small businesses spend 10x more money on promoting their business than on acquiring new technology, hence many companies (from Microsoft, Google, American Express, and Facebook to many new ventures such as Groupon and Living Social) chase the small business segment, aiming at their promotional budget of more than $100 billion per year rather than at their IT budget. 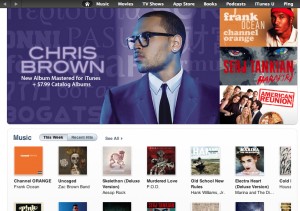 The potential of marketplaces and digital goods, where Apple and Amazon are clear leaders with over 400 million active customers with a credit card on file, was discussed in my post about Apple reinventing the profitable web. There is room for many more low-friction marketplaces for digital goods and services monetized via micro-transactions, which have proven to be a valid monetization mechanism for this new “appified” world.

This is particularly key in the mobile web as paid content revenue dominates the mobile web. Only 5 percent of the global mobile Internet revenues come from advertising while 73 percent comes from eCommerce and 22 percent from paid services. Fifty four percent is paid digital content: apps, ringtones, music, video, etc. The role of micro transactions is key in the mobile web.

Consumerization of the Enterprise

Today the average smartphone user has access to better and more relevant software solutions than the average knowledge worker subject to legacy systems managed by an IT department. Enterprise ready consumer-friendly solutions where corporations pay the transaction fees on behalf of their employees, is another important trend to focus on.

Google Apps, Salesforce.com, Hosted Exchange, and SharePoint (Office 365) are good examples of the potential for monetizing the Web by tapping into the $1.1 trillion spent worldwide on enterprise software and IT services.

Online search offered a major breakthrough in the context of targeting based on knowledge and resulted in search advertising taking almost 50 percent of the total $39 billion in online ad spending in the U.S. in 2012, and it is expected to retain that percentage of market share for the next five years.

Google alone captures more than 45 percent of online advertising spending thanks to its capacity to offer small businesses and corporations search and display advertising targeting at scale. But as discussed above and in previous posts, advertising spending is not enough to keep the “long tail” of Internet companies funded over the past 10 years up and running in a profitable way.

Whether we want to serve a targeted and relevant advertisement at the best possible location, reach the consumer through a mobile device, devise the best possible app to enable a secure transaction, realize the value of a lead-generation campaign online, or enable the best possible tool for asynchronous team collaboration, we need access to end-user knowledge aggregated in real time.

This is probably evident today, yet most new startup and corporate ventures are still looking at the past: display and search advertising. Or even worse, they are still following the mantra of the early 2000s of “build a large audience fast and money will come.”

End-user behavior knowledge is available but not necessarily aggregated. And doing so is not an easy task.

Building large audiences for a portal like Yahoo! or a search engine like Google or the many bankrupted Internet companies that had their 15 minutes of glory was relatively easy in a low friction world of free models. And while social indeed got traction and two-thirds of Internet users in the U.S. are members of a social network (90 perceent of them on Facebook), even Facebook is struggling to monetize that traffic in an efficient way now that over one-third of their user base is mobile only and exposed to no ads.

Knowledge about consumers comes from different sources, and many orthogonal models when combined can result in a more profitable and sustainable Internet. “Search” is to Google what “Content views” is to Yahoo! or what “Social graph interactions” is to Facebook and Twitter or what “online and offline transactions” are to PayPal or American Express or what “Communications patterns” are to Skype or “Online gaming” is to Xbox or “App usage” is to Apple.

Luis J. Salazar serves as an investing and executive adviser to technology and digital media companies. You can follow his blog at NakedCMO and on Twitter @NakedCMO.