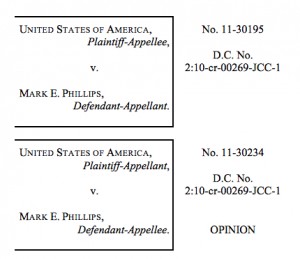 The continuing saga of MOD Systems co-founder Mark E. Phillips, who was sentenced to four years in prison in July 2011 on fraud and money laundering charges, has taken another unusual turn.

According to court documents released this week, Phillips has won a reversal of the mail fraud charge that he was originally convicted on. But the former high-tech executive lost several other attempts to overturn aspects of the conviction, including a claim that the prosecuting attorney had acted improperly during closing arguments because he repeatedly referred to “lies” that Phillips told the jury and employees of MOD.

As you may recall, Phillips was originally convicted of four counts of wire fraud, one count of mail fraud, and two counts of money laundering in March 2011. At the time of the sentencing, U.S. District Judge John Coughenor said that Phillips’ conduct was “deficient, dishonest, imperfect and wrong,” though he also added that the tech entrepreneur was “no Bernie Madoff.”

In a lengthy opinion written by appeals court judge Jed. S. Rakoff, the panel found that the mail fraud charge warranted reversal because the scheme perpetrated by Phillips did not utilize the postal system. The mail fraud issue centered around two $30,000 Breguet watches that the tech entrepreneur purchased with corporate funds via a sham consulting agreement established with girlfriend Jan Wallace.

“If possible could I pay you for this so I can pay out of a company for consulting work,” Phillips allegedly wrote to Wallace upon receiving the first watch.

Even so, Judge Rakoff and the two other judges on the appeals court panel concluded that the mail fraud charge should be reversed:

The fact that payment eventually was made to a watch dealer and that watch dealer mailed a watch in return was not a part of the scheme to defraud MOD and to obtain money from MOD – it was simply the byproduct of that scheme. Put another way, as a result of Phillips’s successful execution of his scheme to defraud, he had sufficient funds to pay for the watch. Therefore, even under the demanding plain error standard, Phillips’s mail fraud conviction must be reversed.

Phillips, who remains incarcerated in Seattle, and according to the Bureau of Prisons database is set for a release date of March 2013, also attempted to win an appeal on his money laundering convictions. But the panel refused to budge on those convictions.

And the panel also backed up the prosecuting attorney’s closing argument, which Phillips had argued consisted of improper conduct due to the attorney’s continued use of the word lie to refer to his behavior.

“Under our case law, it is clear that this is a proper line of attack for a closing statement, as long as the prosecutor is commenting on the evidence and asking the jury to draw reasonable inferences,” Rakoff wrote in the opinion. “The prosecutor here did not give his own opinion of the defendant’s guilt, and the comments were made in the context of explaining why the evidence contradicted Phillips’s testimony.”

Phillips also attempted to dispute aspects of his supervised release, specifically around language related to a ban “frequent[ing] places where controlled substances are illegally sold, used, distributed, or administered.” Phillips did not object to that language at the time of sentencing.

In the appeals process, Phillips had argued that the language was so vague that he may not be able to visit specific neighborhoods in Seattle, citing news stories of drug use in those areas. That, in turn, could restrict his ability to move around Seattle since “every neighborhood is a place where at least one person is illegally using or distributing drugs,” he argued.

But the judges on the panel dismissed that argument, noting that the “common sense reading of the term of supervised release … is neither vague nor overbroad.”

MOD Systems, which is no longer in existence, developed digital media kiosk technology for the electronic distribution of movies and TV shows at airports and other retail locations. It was heavily funded, including backing to the tune of $40 million from the likes of Toshiba and NCR, and led by top technology executives in the Seattle area.

Here’s the full opinion from the U.S. Court of Appeals for the Ninth Circuit. (Thanks to Venkat Balasubramani for alerting us to the decision.)