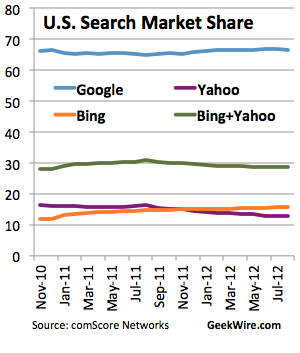 [Update: comScore changed its methods for collecting data in August, making the month-over-month comparisons invalid. The biggest change is in the combined total of Bing and Yahoo searches, as noted below.]

Google’s share of the U.S. search market fell by 0.4 percentage points in the U.S. in August, while Microsoft Bing climbed by 0.2 percentage points — resulting in one of the largest changes in the search landscape in recent months … which actually isn’t saying much.

The end result was that the Microsoft+Yahoo search partnership remained steady at a combined 28.7 percent market share.   [Update: ComScore says the combined total of searches “powered by Bing” was 25.3 percent using its new methods of gathering the stats. The difference is that Microsoft powers the core algorithmic search for Yahoo but not some other search features that comScore counts.]

Microsoft has been trying to differentiate its search engine by leveraging its Facebook partnership, rolling out a new Facebook photo search tool at the end of August. Last week Bing launched a “Bing it On” campaign with a related site where consumers can compare Google and Bing search results in blind “taste tests.”