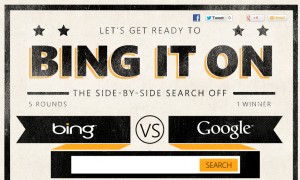 Microsoft’s underdog search engine, Bing, is launching the equivalent of a blind taste test for the search industry today, inviting searchers to compare its results against those of Google on queries of their choice.

The “Bing It On” challenge, available here, will be marketed heavily by Microsoft in a new ad campaign as a way of touting research showing that people prefer its results 2:1 over Google’s results in blind comparison tests. It’s similar in many ways to the Pepsi Challenge that the soda maker used to take on rival Coke starting in the 1970s.

It’s a big gamble by Microsoft, because in some cases the challenge could reinforce Google’s brand.

In my first blind test this morning, for example, Google was the winner, in part because it knew that my search for “Cake” was a reference to the band, whereas Bing thought I was looking for something from the bakery. I was signed in to both my Google and Microsoft accounts, but the search giant had an edge based on my search history.

Microsoft is betting that the research is on the mark, and people overall will prefer its results.

“Since relevancy of search results is the #1 driver of search engine preference, the time is right for a wake-up call for searchers,” writes Mike Nichols, Bing corporate vice president and chief marketing officer, in a post this morning.

At the very least, the big marketing push promises to put Bing on the radar of more people. And Microsoft doesn’t have a lot to lose. The company has about 15 percent market share in the U.S., compared with 66 percent for Google.