Earlier this week, the Ewing Marion Kauffman Foundation issued a blistering report about the venture capital industry, detailing its own experiences investing in some 100 venture capital firms over the past 20 years.

Sixty-two out of the 100 funds it invested in failed to exceed returns available in the public markets, with the foundation writing that there is a “chronic misallocation of capital” occurring in the industry.

The most read story on GeekWire this week, the report added fuel to the debate that the venture capital industry is fundamentally broken.

With that report as a backdrop, the National Venture Capital Association today issued its own report on the performance of venture capital. It offered a slightly more upbeat portrayal of the past 20 years, showing returns that beat most major stock indicies in many time periods.

NVCA president Mark Heesen — who in the past has honestly shared the good and bad — indicated that things may be on the rebound.

“The welcome stability of the venture capital return numbers is coupled with a recognition that performance now needs to accelerate to bring the industry back into its historical double digit range,” said Heesen, president of NVCA. “There are a number of positive factors upon which we hope the venture industry will build to achieve meaningful performance improvements, not least of which is a healthier exit market. If 2011 was the year to recover and stabilize, 2012 should be the year to begin a significant climb back towards vibrant and sustainable returns across all time horizons and stages of investment.”

The report shows that quarterly venture capital returns improved slightly during the three and 10-year time frames when compared to the period ended September 30th. However, they declined during the one, 5-year, 15-year and 20-year periods.

Here’s a look at the full chart from the NVCA and Cambridge Associates. 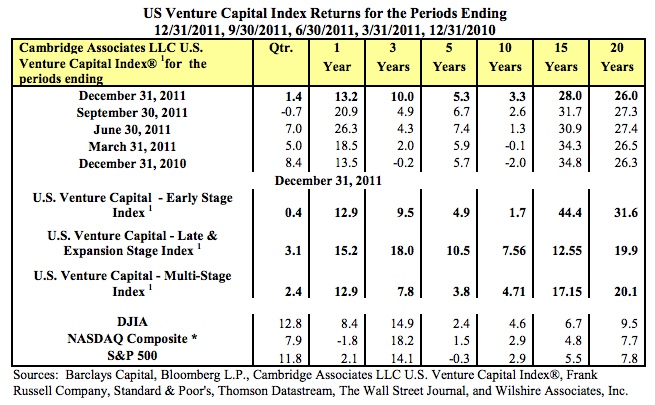