Rudy Gadre admits it. He’s a Seattle “homer.” And that deep hometown pride might be a very good thing for the region’s emerging startup scene.

Gadre is fast becoming one of Seattle’s most important angel investors, bankrolling more than a dozen startups in the past two years. The former Facebook general counsel and Amazon.com VP doesn’t look the part of an angel, at least not when he showed up in a purple Polo pullover and khaki shorts at our offices on a cold December day.

But make no mistake. Gadre is hot on the trail of some of Seattle’s top startups, backing early-stage companies like Yabbly, 9Slides, WalkScore, Jobaline and others in recent months. Because of that investment pace, I wanted to meet Gadre to find out what makes him tick.

Born and raised in north Seattle, Gadre attended Seattle Country Day School and University Prep before heading east to Franklin & Marshall College in Pennsylvania. He returned to the Seattle area, earning his law degree from the University of Washington in 1994.  He worked for a few years at Perkins Coie, before Amazon.com recruited him in 1999 at the peak of the dot-com boom. He remained at Amazon for six years where he served as Vice President and Associate General Counsel for Business Development, New Technologies and Intellectual Property. He left that job for Facebook in 2006, a move that boosted his net worth considerably, before returning to Seattle in 2008 to work for Paul Allen-backed startup Evri.

Now, it’s all angel investing, all of the time.

“I love it because it gives me a chance to stay involved in what’s going on in technology, and hopefully help Seattle and make some more big successes,” said Gadre.

We caught up with Gadre during a recent chat at GeekWire’s office. Here’s more from the discussion:

On how he got into angel investing: “I started to get some calls from people as I was just sitting on my couch who heard I had some money and wondered if I would invest in their company. I wanted to stay in the tech business, so why not. So, I made a couple angel investments from the couch, basically, with no real thought behind it. And then it all came together for me.” 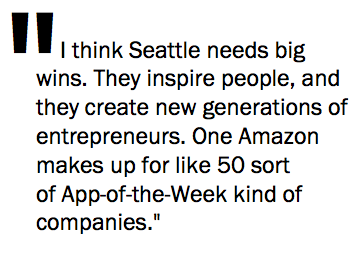 On his love of Seattle: “I am a big Seattle homer. I was born here. I want Seattle to thrive. I want it to be a big success, and everything it can be or should be, really given the amount of money and talent that is in this town. So, I started to think to myself: ‘What can I do that is rewarding for me, and hopefully will be financially rewarding as well as emotionally rewarding. I love to see all of the new ideas that are out there, and meet entrepreneurs, and see all the exciting things that are happening around town. And it occurred to me that I have a background at Amazon and Facebook and I know people, and maybe angel investing, maybe not as a profession, but as a serious endeavor would be up my alley…. And from there it just snowballed.”

On whether his legal background helps him as an angel: “It doesn’t hurt. I am not intimidated by deals as such. I am familiar with what all of the terms mean, and the levers you can pull and the various pressure points. But there is a lot more involved in making an angel investment decision than just what the terms of the deal are. It is helpful, but I think it is more important to have an open mind, and be curious, and keep abreast of the developments in the technology world.”

On what he looks for in entrepreneurs: “The Seattle market is very conservative compared to what I experienced down in the Bay Area. Not as much the entrepreneurs, as the investors. That, actually, from my standpoint is OK. Because, from my standpoint, I am not an overly conservative investor by nature. In keeping in my philanthropic goal to see Seattle thrive, you know it has been 18 years since Amazon was founded. I think Seattle needs big wins. They inspire people, and they create new generations of entrepreneurs. One Amazon makes up for like 50 sort of App-of-the-Week kind of companies. I like to invest in entrepreneurs who have big ideas. Big vision companies…. Of course, that comes with corresponding data that the vast majority of the people will not end up making something that is truly huge. But, from my standpoint, I am doing it partly because I want to see something in Seattle succeed. If I make money, that’s good. I want to make money. But, if I lose money, I can live with that. I am not sort of betting the ranch. So, what I look for in an entrepreneur, I want someone who is smart. I want someone who is talented, but in particular, I want someone who has a big vision. I’d like to see a vision of something that’s bigger than “Oh, we are going to sell it for $50 million in two years kind of thing.’ I try to gravitate towards investments … that have a big potential opportunity to make an impact.” 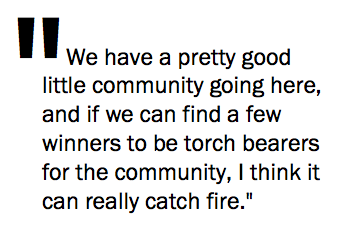 On why Seattle angels are typically more conservative: “I think a lot of people were burned by the dot-com crash, and then also, more recently, the financial crisis. I think that Seattle comes larger from an enterprise background, and the previous generation of angels were from Microsoft. And consumer Internet stuff, which tends to be huge or crater, is not as much in the traditional Seattle mold. Because people made money in the early parts of the dot-com years, then there was the crash, and then there was a long gap. Whereas, in Silicon Valley, you had some of the PayPals and that sort of thing in that dead zone, we didn’t really have that same level of activity. And, as people get older, they just naturally get more conservative. You are not going to find people who are out there trying to change the world as much as you get into the older demographics, and now money in Seattle is just older. Let’s just face it, it sort of is.”

On whether things are getting better in Seattle: “I think we are starting to see more risk taking in Seattle…. I am hopeful that Seattle will start to loosen up the purse strings a little bit. It is just frustrating as hell. InternMatch is a company I invested in, and they were founded up here, but moved to Valley because they couldn’t get funded. Box founded up here, but couldn’t get funded. These are things that should be huge Seattle success stories, but they’ve gone down to the Bay Area for lack of capital typically.”

On how you could reduce the Seattle migration to the Valley: “I think we need a few big wins. We need companies that are given billion dollar valuations in the marketplace. And that shows people that it can be done here. It gives entrepreneurs an idea to leave Microsoft or an Amazon where they might be comfortable, and take a chance on something. And it gives capital a reason to say: ‘Hey, it can be done in Seattle.’ We are seeing a few of those, with Zulily and what not. But big obvious wins in terms of valuations would be pretty helpful.”

On how he sources deals: “It is pretty good actually. It is not like Silicon Valley. But I see two or three deals per week at this point, and I don’t even typically attend the Alliance of Angels and didn’t attend the TechStars Demo Day, and stuff like that. It is just from people I know, and people in my network. For me, deal flow has not been an issue at all. We have a pretty good little community going here, and if we can find a few winners to be torch bearers for the community, I think it can really catch fire.”

On raising the profile of Seattle: “We are not good at promoting ourselves here. I was just talking to a friend and he was saying why not get startups to put a “Made in Seattle” button on their Web site. Why not? And start creating a brand for the city, and I thought that was a pretty good idea. For me personally, I want to do whatever I can to improve the tech ecosystem here. I am not a publicity seeker, but I want to do whatever I can, and if that means getting out in front of people (I’ll do that).”

On the future of Amazon: “Jeff Bezos is just a fountain of ideas. But he’s not like an idea man. He’s got deep insights and the ability to execute. It is pretty amazing, and when I was at Amazon, I was not a direct report of Jeff’s, but I worked with him enough to get a sense of how he works. And I just gave up questioning. I was like: He just sees things that I don’t see, and you just roll with it…. It is pretty amazing what they are doing, and I am glad they’ve decided to keep it in Seattle…. It is an amazing platform that they have buit. It is very flexible, and there’s obviously a lot of great talent at the company and hiring standards are still very high. As long as Jeff is at the helm, they are going to continue to surprise, because they are thinking many steps ahead of certainly the way I would think.”

Do you think an entrepreneurial wave can come out of Amazon that can impact this community? “I think we missed the boat to some extent. The dot-com crash sort of derailed the people who would have been the (angels and entrepreneurs). At Microsoft, with Rich Barton and Rob Glaser, you got some people who came out of the earlier days. But now anyone who is at Amazon or Microsoft is there presumably because they like being in a big company. And so the people who would have left Amazon to found those things, their opportunity was sort of derailed by the dot-com crash because of the time they would have been leaving Amazon to found new companies, there wasn’t funding available … and then by the time the thing recovered, that early-generation of people who were pioneering at Amazon probably missed the window to some extent. They have family responsibilities. That’s my working theory. You’ve seen a few people out there … but it wasn’t as much as it should have been…. My hope is that Ari (Steinberg) and people at Facebook will go do things…. And whether it is Google or firms that came up from the Bay Area, I am hoping that people will march out of those places and start founding companies up here.”