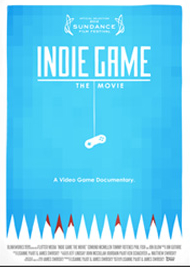 The critically-acclaimed documentary film Indie Game: The Movie — honored at both the Sundance Film Festival and SXSW — will be rolling into Seattle this Friday for a special screening at the SIFF Cinema at the Uptown. Canadian filmmakers James Swirsky and Lisanne Pajot also will be on hand to answer questions from the audience.

Initially bankrolled through two Kicstarter fundraising campaigns, the film tells the stories of four indie game developers as they roll out their creations to the world. The Globe and Mail called the film “polished and poignant,” while The Hollywood Reporter said it offers a “compelling glimpse into artistic compulsion in video games.”

Of course, Seattle — home to Nintendo of America, PopCap, Valve, Big Fish Games as well as DigiPen University and the Academy of Interactive Entertainment– is crawling with gaming entrepreneurs. So, it’s not a surprise that the filmmakers have added another show to the lineup on Friday night. A spokesperson for the film says they’ve been getting a very strong response from the Seattle community, even though no gamers in the film are from the Emerald City.

From what we’re told, Indie Game pulls at the heart strings. But we will have to wait to see if it is as much of an emotional roller coaster ride as The King of Kong, in my view the best video game documentary of all time.

Here’s the trailer for Indie Game.