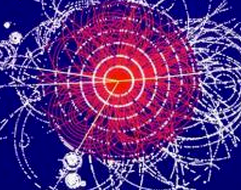 Maybe it’s not true that nothing good happens in a bar after midnight.

Excitement is building in advance of a major news conference tonight where scientists involved with the Large Hadron Collider are expected to reveal the latest in their search for the elusive Higgs Boson particle. It’s considered the last great question in particle physics, explaining why matter has mass — and early leaks indicate that they’ve found something intriguing.

The organization behind the effort, CERN, is webcasting the news conference starting at midnight our time. You can watch from the comfort of your home, but here’s a better option: A live viewing party will be hosted at T.S. McHugh’s pub in Seattle with faculty from the University of Washington Physics department, who will be explaining and interpreting the news.

The live stream starts at midnight, preceded at 10 p.m. by mini-presentations, videos and discussions with the UW physicists to provide context for the news that follows.

The public is invited to the free event. More details on the Pacific Science Center site. Thanks to the Northwest Science Writers Association for pointing this out.

Previously on GeekWire: Q&A: Physicist Lisa Randall on space, time and how science is even better than fiction