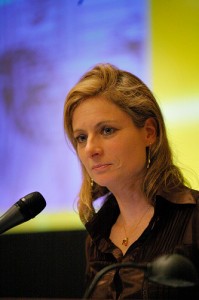 Theoretical physicist Lisa Randall, a Harvard University professor, is on a quest to figure out how the universe works, at the most fundamental level, using math and science as her tool.

Her work with fellow physicist Raman Sundrum has already led to one of the best-known theories in the field. Her new book, Knocking on Heaven’s Door, offers insights into physics and science, along with an inside look at the Large Hadron Collider, the giant particle accelerator below the border of France and Switzerland.

Randall is speaking Wednesday night at Town Hall in Seattle, and GeekWire spoke to her in advance. Continue reading for excerpts.

How do you explain what you do to people who aren’t particle physicists?

Randall: We’re trying to understand what is out there in the universe — the basic building blocks of matter, the fundamental forces through which those ingredients interact, and how it all connects. Today, we have a real chance of answering questions about elementary particle masses, where they arise and why they have the values they do. On top of that, in the process of answering those questions, we might address even bigger questions — what is the nature of space and time, and what are the symmetries of the universe, and do they extend beyond, into the quantum mechanical regime.

What can the world today learn from how scientists think?

Randall: There’s many, many big critical questions to address today, and they don’t have easy answers. It’s important to understand and be comfortable with how science approaches problems: how we ask questions, how we acknowledge what we know and what we don’t know, and how we use data to choose among different ideas. Given the enormity of the problems we have today, we would want to use any tools at our disposal. I do think sometimes the level of the debate is lowered to try to accommodate people who are afraid of science or complex issues, but I think it’s time to raise the level of that debate.

Maybe it’s the influence of science fiction on our culture, but when you start talking about things like extra dimensions of space, I immediately have in my mind these very ‘Star Trek’ images — people leaping from one part of the universe to another. How much of that helps you in explaining what you do, vs. hurting you by making it too simplistic? 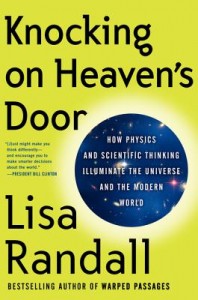 Randall: Well, I think it gets people interested, which is a good thing. But I really want to tell people what science really says. I don’t like to give misleading impressions. One of the reasons I wrote the book I the way I did, and didn’t just jump right into talking about, say, extra dimensions or the Large Hadron Collider itself, was because I really wanted people to understand what it means for science to be real. Our intuition is guided by human scales so that it seems that everything removed from those scales is some exotic thing that’s science fiction. But it’s not. Technology helps us systematically advance our understanding over time — going well beyond the length scales we are familiar with.

What I wanted to get across was exactly what science can and cannot tell us about the universe, and how that works, and how ideas build on each other. And also why, even if there are extra dimensions, we know that humans don’t fly through them, because we have constraints in those scales. But extra dimensions are still possible. They just don’t necessarily have the properties assigned to them in fiction or movies. And furthermore we have exotic ideas that come out of science that even science fiction writers didn’t think of. For example, the idea of an infinite extra dimension came out of the math. Raman Sundrum and I weren’t trying to find that. But we solved Einstein’s equations of gravity in a particular setup and found the geometry of space permitted an undetectable infinite extra dimension. It doesn’t mean it necessarily exists, but it’s definitely a possibility because space-time can be that dramatically curved, or warped. We didn’t intend for that to happen, it came out of the math. Sometimes it’s just more exciting when ideas are reality-based, and to really understand what science could be telling us.

What’s the promise of the Large Hadron Collider, and what do you believe we’ll learn from it? 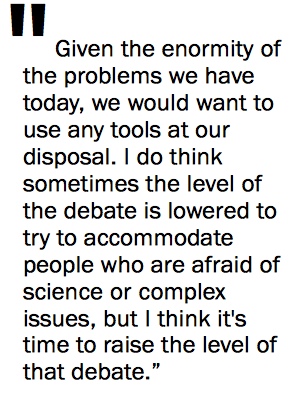 Randall: The Large Hadron Collider is exploring shorter distances and higher energies than we’ve ever studied before. What we definitely hope to learn are how elementary particles acquire their mass. That has to do with something called the Higgs mechanism. It’s difficult to explain — I have an entire chapter on this subject — but it is as if a charge spreads throughout space and interacts with elementary matter so that particles acquire mass. Not an electric charge, but basically something spreads throughout space, that particles interact with. And the ones that interact the most get the biggest mass. The ones that interact the least are the lightest.. Although most physicists believe that’s what’s going on, we don’t know what underlying structure implements this mechanism — what is responsible for changing the vacuum in this way. That’s why it’s so exciting to look for something called the Higgs boson, or more generally what we call a Higgs sector — something that will play the role of this Higgs boson — something that spreads this charge throughout space and gives particles their mass. We want to know, first of all, are we right about the Higgs mechanism? But also, what is it that’s involved? So that’s one class of questions.

Another class of questions has to do with why masses are what they are. Why isn’t everything 16 orders of magnitude heavier, which is what you would expect if you just followed through the principles of quantum mechanics and special relativity. That question is a very interesting one, but it’s very hard to solve. Some of the answers involve exotic ideas, such as extensions of space-time symmetry into the quantum-mechanical regime, or even an extra dimension of space, a warped extra dimension of space, as Raman Sundrum and I proposed.

How far off do you think we are at the Large Hadron Collider? I’ve seen estimates of 2014 before the highest-energy collisions take place?

Randall: That’s probably right. The machine is actually operating spectacularly. It’s running through 2012, which hadn’t been the original plan, but it’s running so well, and it can maybe say something about the Higgs boson this next year. After that, it’s going to shut down for an upgrade to higher energy (about double what it is running at now).  The reason for the delay is caution given what happened before, in order to make sure everything is on track. But we shouldn’t forget how well things are going now, just running really well. So when it turns back on, it could be very exciting since we will get to the higher energies that were originally intended.

You write in the book about visiting the site. How would you describe the experience?

Randall: I’ve been to other particle accelerators before, and this one is just very impressive. It’s beautiful. I grew up in New York, and we’re used to big buildings, but this is a big machine, and it’s a big machine that measures things at micron-level precision. You have this enormous object, in some sense, but it’s doing this precision measurement. That’s what’s impressive. And how careful they were. It’s on a slight slope, they were anticipating slight movement. When they drop heavy pieces into place like the ATLAS magnets, they anticipated how gravity would affect it. It’s just really a magnificent achievement.

What’s the message you’re hoping to get across to the audience in Seattle?

Randall: One is where science is today — particle physics, what I do. In particular, these ideas about the Large Hadron Collider. But also the idea of scale, and how scale plays a role in how we think about science. To put it in perspective, and get away from the science fiction, to understand how science has systematically evolved, and how ideas build on each other.

Tickets for Randall’s appearance at Town Hall tomorrow night are available here. For more, here’s an excerpt from her recent appearance on Charlie Rose.