One could successfully argue that modern geek culture wouldn’t exist in its current form without 20th century science fiction and its fan culture, the true Ancient Geeks. 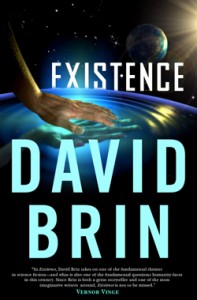 Tech’s unconferences have their roots in PowerPoint-free, volunteer-organized, fan-driven science-fiction conventions run by organizations such as the Los Angeles Science Fantasy Society (LASFS), which go back nearly eight decades. Web discussion boards are the digital progeny of early science-fiction fanzines, open publications written by fans for other fans with pages of (poorly reproduced by mimeograph) letters and comments on previous letters. And even thick-rimmed, black nerdy glasses — currently back in style — have a proud science-fiction fan heritage, albeit today’s models omit the tape supporting the bridge.

Even though geek culture, Battle Bridge-like, separated from science fiction culture at the dawn of the personal computer and later the World Wide Web, there remains a tenuous and historic connection.

David Brin is a scientist, inventor and writer who proudly exists in both current and fantastic tech worlds. He’s a New York Times bestselling author, winner of multiple Hugo, Nebula and other awards, and even had the distinction (if one doesn’t compare the celluloid result to the source material) of seeing his book The Postman made into a film directed by Kevin Costner.

Brin’s latest novel from Tor Books is Existence. In advance of his visit to Seattle for Westercon 65 (the West Coast Science Fantasy Conference), we discussed the intersection of tech, geek and science fiction — and the future of the literature focused on the future.

1) What is right with science fiction today?

Brin: SF has so flooded into popular culture and beyond that it’s becoming a staple of discussion in politics and philosophy and daily life. The New Yorker just ran a “science fiction issue” featuring works by some of our literary lights, a few of whom spent decades denying they ever wrote sci-fi. People appear to have realized, at last, that we’re in the 21st century. Time to buy that silvery spandex outfit, I guess.

Another good thing, the sheer number of brilliant young writers coming down the pike. They can turn a phrase with the very best in any genre, in any era, and there are so many of them! Liberated by new technology to explore innovative storytelling methods, like novels with embedded media or animated storyboards.

2) What is wrong with science fiction today?

Brin: Too many authors and film-makers buy into the playground notion that cynicism is somehow chic and knowing. So many 50- or 80-year-old clichés are rampant (e.g. “hey look, I invented suspicion of authority!”) while nostalgia pushes aside what used to be our genre’s golden notion: that we in this civilization might find ways to improve, to solve problems, to become better than we were. A difficult task, fraught with many pitfalls. But too many portray it now as hopeless.

How pathetic! That beneficiaries of relentless progress should repay that debt by casting doubt on the very possibility of progress? And lest you mistake this for political, I see the habit spewing from both ends of the hoary, lobotomizing so-called “left-right axis.” My late, lamented friend Ray Bradbury called this fetish the very lowest form of ingratitude.

Not that all SF has to be Pollyanna sunny or tech-praising-pulp. Ray plumbed the darkest depths of the human soul, in tales that could freeze your heart. So? He considered fantasy chills and terrifying sci-fi what-ifs to be part of the process, exploring our dark corners and failure modes, always aiming to achieve effective warnings. Self-preventing prophecies.

Some of us are rebelling. Neal Stephenson, Kim Stanley Robinson, Greg Bear and others have been laying down a challenge to our peers. If you think we have problems, expose them! But spare a little effort to suggesting solutions. Or stoking others with belief that we can.

3) Does the ascendance — and some would say replacement — of literary science fiction by multi-sensory media worry you? Editor H.L. Gold, as I recall, once famously said, “the Golden Age of science fiction is 14.” Is this still true in an age of 3-D movies, realistic CGI even on TV shows, and immersive video games with science fiction storylines and settings?

Brin: Good question. Certainly when it comes to mass media, I can grumble about the immaturity, the clichés, the shallow idea space and the relentless cowardice of sequel-remake-reboot-itis. Whenever I see a new film I deliberately tune down several “dials” in my mind — critical faculties associated with logic, plotting, science — just so I can retain some ability to enjoy a flick in the spirit it’s offered. (Anyway, that helps to keep both wife and daughter from strangling me, during the show.) And yes, sometimes I get the dials tuned right, though I do resent having to do it.

But we’re at the dawn of a new era. In today’s Hollywood, writers are the lowest form of life. But that will change when a small team — writer-led — can create a rough, animated storyboard of a film, fully 90-minutes long with spoken dialogue and music, that can gain a web following long before any studio sees it. This new, intermediate art form will change everything and shift the center of power over to story.

Brin: Look, it may surprise you that I, the Hard-SF Guy, believe there’s magic. But let’s define it as the use of incantations to create vivid subjective realities in other people’s heads. That’s what most magic has always been. The shaman might not really be able to make it rain. But if his shtick was good, he would get fed!

By that light, we authors, especially in science fiction, are the greatest and most consistent magicians. We concoct long incantations — chains of spaces and black squiggles (a million of them in Existence) — and skilled recipients of the spell (well-educated readers) proceed to scan those squiggles with their eyes, decrypting them swiftly into clever dialogue, deep emotions and insight, or star-spanning explosions. This partnership of spell-weaver and incantation-user is stunning, and remains far more effective for the full-rich texture of invented worlds than any competing medium.

5) You’ve occasionally dipped your pen into non-fiction, including 1998’s The Transparent Society (which won the American Library Association’s Freedom of Speech Award), a book that seems oddly prescient in time of privacy leaks and, some would say, sloppy privacy boundaries both on the part of companies (Facebook) and individuals.

Back then, you effectively said that openness, or letting everyone see the cards each other are holding that could be played on the other – be they corporate, government or individual — was the best policy when it came to organizations’ collecting and hoarding of private information. In the more than a dozen years that have passed, do you still maintain that? Or has your position, well, evolved in light of recent web social media events?

Brin: Across at least 6,000 years, nearly every civilization stuttered with barely perceptible progress and dismal statecraft. The Enlightenment’s chief tool in changing all that has been a suite of “arenas” in which we can compete, make fresh alliances, buy, sell, argue or negotiate without blood on the floor. These arenas are democracy, science, markets and justice courts. And here’s the thing. All four work best when most of the participants know most of what’s going on, most of the time. They wither and sicken and die, when denied light.

In The Transparent Society I am actually no radical. I accept that some secrecy is necessary and avow that human beings have an intrinsic need for some privacy. But here’s the irony. We’ll be far more likely to be able to defend some privacy if we all can see (thus catching the peeping toms and would-be Big Brothers). The term is “sousveillance.”

6) Many in technology used to say they were heavily influenced by science fiction — both the literature and, famously, the first television series to treat literate science fiction seriously, Star Trek. Lately, though, tech startups seem to cite their primary influence as other technologists, such as Steve Jobs and Bill Gates. Does this show a lack of imagination? Or a lack of good science fiction? Or something else?

Brin: Well, once some kids started making billions while turning SF’nal ideas real, who do you think will be the role models? I just hope those billionaires remember to re-prime the well.

7) Plug time. Since we’re talking around Hollywood, if you had to give a high-concept pitch for Existence in a phrase, what would it be?

Brin: It’s 2050. People have been smart but there’s a minefield of threats and dangers ahead, at which point a message in a bottle washes onto our world, with an offer and a warning: “JOIN US.” 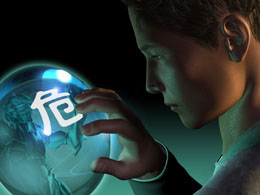 Of course, what I’d really do is refer producers to the vivid, three-minute preview/trailer for the book, with gorgeous hand-painted images by the great web artist Patrick Farley. (Yes, books now have trailers.)

8) What is, or should, the role of science fiction be in inspiring students in STEM (science-technolology-engineering-math) or other science-related disciplines, beyond entertainment?

Brin: Not all SF or fantasy has to inspire new scientists and engineers. But it’s good to know that kids are still reading the challenging stuff: the tales filled with adventure and personal drama, but also lots and lots of ideas.

9) What one thing excites you in science today that even most geeks may not be aware of?

Brin: What? And give away my best new story notions before I can write ’em? I was jazzed to learn of Planetary Resources, the new company with deep pockets aiming to mine asteroids and make us all so rich we can turn the Earth into a park.

It turns out that Europa and Enceledus may not be the only ice-covered moons with buried seas. And did you know that mammals have an inherent ability to regrow body parts and limbs? We appear to have abandoned it many, many millions of years ago, but docs are learning how to insert the missing gears and crank that old machinery.

Do you doubt I could go on and on?

10) What one writer is writing in science fiction today, aside from you, that you consider a must-read for solid yet accessible scientific extrapolation?

Brin: Vernor Vinge, though I find Stephen Baxter and Rob Sawyer to be right up there. Geoff Landis gets the science right. Three English majors, Nancy Kress, Kim Stanley Robinson and Greg Bear, have an uncanny knack, as do some younger writers like ….

But you asked for just one. I’ll stop at seven, but attach some recommended reading list links. Now let’s cross that minefield.