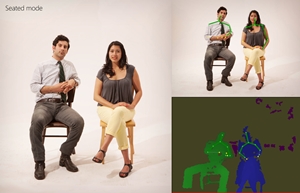 Version 1.5 of the SDK has been making headlines today for adding detailed facial tracking, including the ability to follow the position of the head, movement of eyebrows, and shape of the mouth.

But the update also adds support for tracking users when they’re seated, not just when they’re standing. That’s interesting because it’s another example of Microsoft differentiating Kinect for Windows from its Xbox 360 counterpart, enabling different types of uses beyond games in the living room.

Seated Skeletal Tracking is now available. This tracks a 10-joint head/shoulders/arms skeleton, ignoring the leg and hip joints. It is not restricted to seated positions; it also tracks head/shoulders/arms when a person is standing. This makes it possible to create applications that are optimized for seated scenarios (such as office work with productivity software or interacting with 3D data) or standing scenarios in which the lower body isn’t visible to the sensor (such as interacting with a kiosk or when navigating through MRI data in an operating room).

That’s one of several new features being rolled out through the SDK. Microsoft is also expanding Kinect for Windows to more parts of the world.

We saw a few of the projects in the works last week on our tour of the company’s Kinect Accelerator program for startups in Seattle.

More details on the SDK in this video from Microsoft’s Channel 9 developer site.